Empire Resources poised to transition from explorer to producer

In the course of releasing its quarterly report for the three months to June 30, 2017, Empire Resources (ASX: ERL) advised the market that it had circa 4500 tonnes of ore mined and stockpiled ready to commence processing at Maximus Resources’ Burbanks Mill, 9 kilometres south of Coolgardie.

ERL’s Managing Director, David Sargeant, said that the company would begin transporting ore to the plant next week. Each haulage and treatment campaign is scheduled to process between 15,000 and 20,000 tonnes of gold ore.

This will see the company transition from explorer to producer early in the fiscal 2018 year. However, the company is also committed to an active exploration program which will see it commence a six-hole diamond drilling campaign targeting underground mineralisation at the Penny’s Find project in the September quarter.

It should be noted here that this is a speculative stock and investors should seek professional financial advice if considering this stock for their portfolio.

There appear to be some highly prospective targets as indicated below. 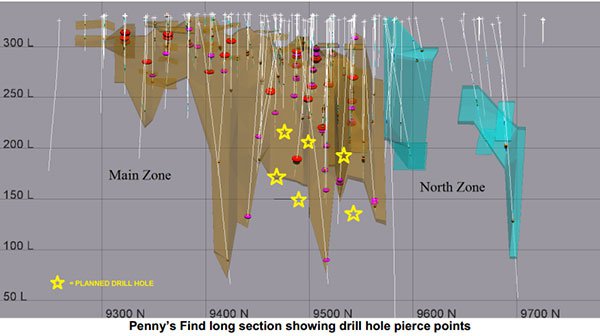 The upcoming drilling campaign is aimed at increasing confidence in the underground mineralisation at Penny’s Find, as well as converting some inferred resources to the indicated category. There is also the potential to establish an increased resource from deeper drilling.

This drilling campaign is a precursor to the commencement of a final feasibility study, a key milestone in the company’s fiscal 2018 program. As a backdrop, the Penny’s Find Bankable Feasibility Study (BFS) was released in June, and based on a gold price of AUD$1500 per ounce and a probable ore reserve of 146,000 tonnes grading 4.62 grams per tonne gold, the open pit operation alone would generate in the order of $7.6 million in free cash flow in less than 12 months.

Management’s achievements in laying the foundation for new work in the coming 12 months can’t be understated. In the three months to June 30 the open pit had progressed to a 10 metre depth, and the average ore grade was 2.2 grams per tonne gold.

Importantly, the company hasn’t eaten into its exploration funding with the cost of pre-mining site works 17% below budget.

Going deeper is the main game as ERL works to eventually take the mine underground as Penny’s Find’s gold mineralisation extends to at least 250 metres in depth where it remains open with a current known deeper inferred and indicated resource inventory of 170,000 tonnes grading 5.4 grams per tonne gold beneath the open pit.

A preliminary underground mine design has been completed as follows to ensure it is able to mesh smoothly with the completion of the open pit mining operation. 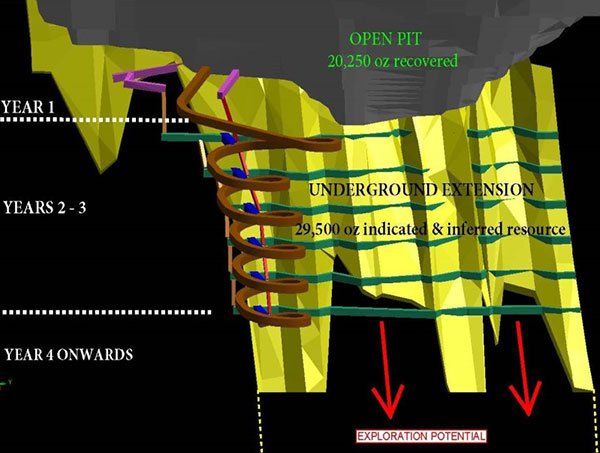