Investors have responded positively to Elysium Resources’ (ASX:EYM) proposed acquisition of Hardey Resources which was announced on Tuesday morning.

The acquisition provides EYM with exposure to gold and base metal projects located in the Pilbara region of Western Australia that were previously owned by Hardey. These were the Bellarey, Hamersley, Cheela and Elsie North projects, covering 512 square kilometres of Fortescue Group Rocks, as well as the Grace project located in the Paterson province in Western Australia.

All of the Hardey projects are prospective for gold and base metals, though management cautioned investors that further work is required to confirm the gold-bearing nature of the prospective conglomerate sequences which have been identified within the tenements.

As this project is in its early stages investors should seek professional financial advice if considering this stock for their portfolio.

It was in November last year that Hardey applied for an exploration licence covering 163 square metres of ground prospective for Witwatersrand-style conglomerate-hosted gold and high grade orogenic gold in the Paraburdoo region of Western Australia.

Since then, a number of ASX listed explorers have identified Witwatersrand type mineralisation in that region, prompting a rush for land that may host extensions to the orebodies currently being explored.

This was the catalyst for Hardey to identify further licences, resulting in a tenement package which comprises 512 square kilometres of Fortescue Group Rocks and the underlying Pilbara granite-greenstone terrain.

Elysium to follow in the footsteps of Artemis, Novo and De Grey

Commenting on recent developments in the region and underlining the significance of this development for EYM, management said, “Subject to completion of the acquisition, Elysium will hold a significant tenement package that is prospective for Paleo-Placer ‘Witwatersrand-style’ conglomerate-hosted gold mineralisation similar to the discoveries reported recently in the region by Novo Resources Limited (TSX-V:NVO) and Artemis Resources (ASX:ARV) at Purdy’s Reward and OscarWits and, most recently, by De Grey Mining (ASX:DEG) at the Loudens Patch prospect.” 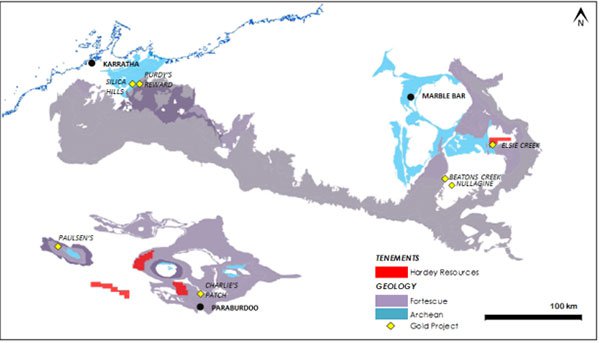 Management highlighted the fact that the discoveries by Novo/Artemis and De Grey, included a significant quantity of gold nuggets found at surface. This style of mineralisation is traditionally associated with a regionally extensive geological formation known as the Fortescue Group of rocks (Fortescue Group Rocks) which includes the lower “Hardey Formation” and the Mount Roe Basalt.

Importantly, the Hardey Formation has been mapped extensively throughout the Bellary project tenements by the Geological Survey of Western Australia.

In order to gain a more thorough understanding of the geology and the prospectivity of the region, both Hardey prospectors and an Elysium geological field team will immediately commence exploration activity.

Given the early stage exploration results achieved by the likes of Artemis, EYM could be the subject of further near-term news driven share price reratings. Today’s news resulted in the company’s shares spiking 150 per cent in the first two hours of trading.

The Witwatersrand style mineralisation is often located near surface in the form of gold nuggets, leading to economical and speedy exploration progress, at times only requiring a handheld device.