Elysium Resources to focus on gold in 2018

In September, Elysium Resources (ASX:EYM) successfully extended the mineralisation potential at its Lloyd’s prospect in New South Wales, and the company informed the market on Wednesday that it now plans to focus on gold prospects in 2018 by drilling untested gold targets at its Burraga project.

Exploration at Burraga in 2018 will continue at the Lloyds Copper Mine extension project with planning of phase 3 drilling underway. The company is looking to ascertain the value of developing its polymetallic portfolio by progressing the most promising gold prospects within the Burraga portfolio.

EYM has received all regulatory approvals and land access requirements to allow drilling at the Hackney’s Creek gold target, immediately north of the Lucky Draw gold mine which was mined by RGC Ltd from 1989 to 1992, producing 1.4 million tonnes grading 4.2 grams per tonne for 191,000 ounces of gold. 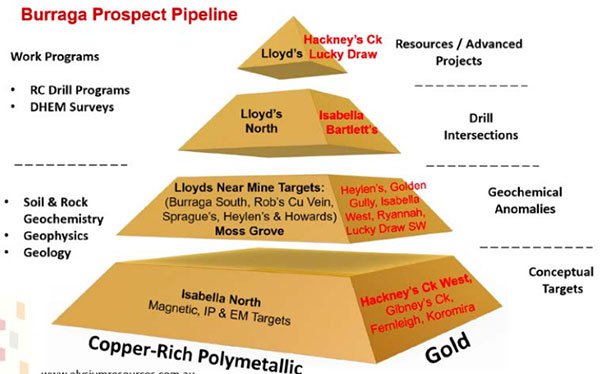 The deposit has a JORC 2004 compliant inferred resource of 2.2 million tonnes grading 1.4 grams per tonne gold for 101,800 ounces of gold. However, this has yet to be updated to comply with JORC 2012 standards.

Given drilling to date has been wide spaced, management expects that it can update the Resource to JORC 2012 compliance, potentially resulting in an increased resource as the company undertakes infill drilling. There is evidence that the orebody plunges to the south-west, and the drilling campaign will also be aimed at exploring this area.

Underexplored satellite prospects may be targeted in 2018

Depending on the Hackney’s Creek drilling program, EYM intends to investigate the potential for mineralisation at the underexplored Lucky Draw prospect despite the delineation of anomalous gold zones.

Management will also conduct further soil testing at the Isabella prospect, south-east of Lucky Draw and Hackney’s Creek as previous testing indicated a similar geochemical signature to those at Hackney’s and Lucky Draw. Once again, this is a relatively underexplored prospect but in the 1990’s delivered some promising drilling results including 7 metres grading 5.3 grams per tonne gold.