This means clear comparative advantages in being able to develop economically efficient mining operations. Relative to Mt Peake, which is ~190km north of Alice Springs, the Wollagalong project is 6km north while the Chisholm prospect is 13km east. Both VanMin’s projects are contiguous to the Mt Peake tenure, forming the north and east boundaries. 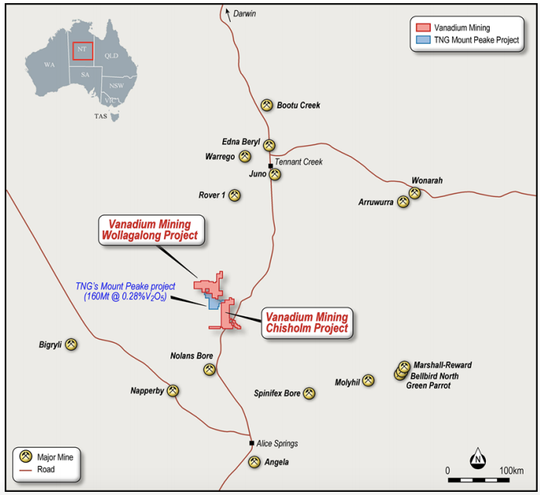 “The aeromagnetic and soil sampling evidence is quite compelling that both projects are highly prospective for vanadium mineralisation. Taking a holistic view, the Board is delighted the due diligence to date on Vanadium Mining’s six assets across Queensland and the Northern Territory is heading in the right direction,” he said.

The largest vanadium resources in the Northern Territory are associated with mafic-hosted vanadium magnetite deposits in the Arunta Region’s Aileron Geological Province. These mafic-hosted VTM deposits (which is the type targeted within the Wollagalong and Chisholm projects) have only recently been identified in the Jervois area and at the Mt Peake project.

This implies that due to the Wollagalong and Chisholm projects’ proximity to Mt Peake (which has a JORC 2012 code reported total mineral resource of 160Mt at 0.28% Vanadium oxide, 5% Titanium dioxide and 22% Iron, cut-off grade 0.1% Vanadium oxide), there is clearly significant exploration upside to uncover additional vanadium mineralisation.

The probability would appear to be higher for the Wollagalong project given the surface exposures of the Anningie Formation, which underpins the VTM economic mineralisation at Mt Peake, has been mapped within its boundaries. 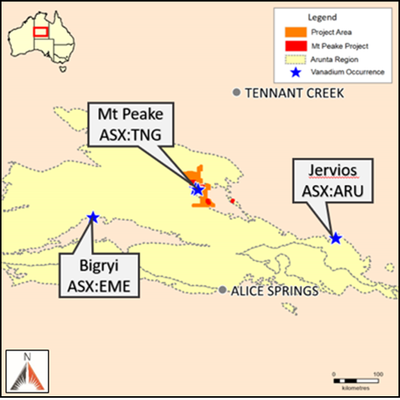 As an aside, the Jervois vanadium deposit forms part of a joint venture (now known as Bonya JV) between Arafura Resources Limited and Thor Mining Limited. A drill intersection, which returned 49m at 0.96% Vanadium Oxide, 8.55% Titanium Oxide and 34.5% Iron (over 0-49m depth range), further highlights the vanadium potential within the region.

The second known style of vanadium mineralisation in the NT is associated with sandstone-hosted uranium deposits. The largest known resource is at the Bigrlyi uranium prospect, which has a total mineral resource of 7.46Mt at 0.13% Triuranium octoxide and 0.12% Vanadium Oxide cut-off grade 500ppm Triuranium octoxide (reported under the JORC 2004 code).

In Australia, VTM deposits are typically formed on cratons of Archean to Proterozoic age and are closely associated with large igneous provinces — hence this is a focus when undertaking exploration activities. Mafic to ultramafic complexes that host VTM deposits are generally apparent as strong, clearly defined anomalies from aeromagnetic surveys. Aeromagnetic surveys confirm that Wollagalong and Chisholm have highly magnetic anomalies within their boundaries.

Assessing the geophysics, the aeromagnetic image identifies two phases of potential mineralisation with east-west and north-south trending structures visible and intersecting within the project areas. VanMin’s projects have similar geological and magnetic features to the Mt Peake deposit. HDY’s team report that “they are highly probable to be gabbro-hosted magnetite deposits, the same as those that underlie Mt Peake’s VTM mineral resource”.

As vanadium mineralisation within these systems is relatively shallow, selecting prospective targets for further follow-up within the two projects is straightforward — which provides the opportunity to expedite and de-risk the projects materially with a high-level exploration program that aims to potentially model, estimate, and report a JORC 2012 compliant vanadium mineral resource. 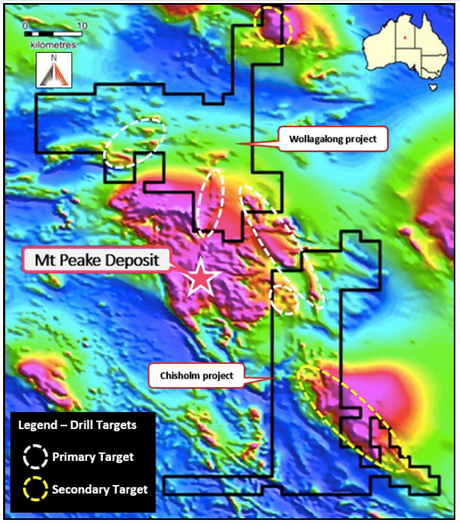 Next, HDY will complete due diligence reviews for Nelly Vanadium Mine, Argentina and VanMin projects.