Kingston Resources’ (ASX:KSN) is set to begin drilling on its Livingston Gold Project in the Bryah Basin northwest of Meekatharra in WA.

Supported by the Western Australian Government’s 2018 Exploration Incentive Scheme, KSN will commence an 8000m RAB (Rotary Air Blast) drilling programme in mid-April. RAB drilling is designed to test for gold mineralisation at depth quickly and cheaply in variable terrain. This programme will test a number of gold-in-soil anomalies identified in KSN’s auger sampling programme last year around the Livingstone’s Find and Stanley prospects.

The Livingstone Gold Project hosts a 50koz gold Resource as well as a number of gold anomalies, with over 30 kilometres of prospective geological strike on the southern edge of the Bryah Basin. 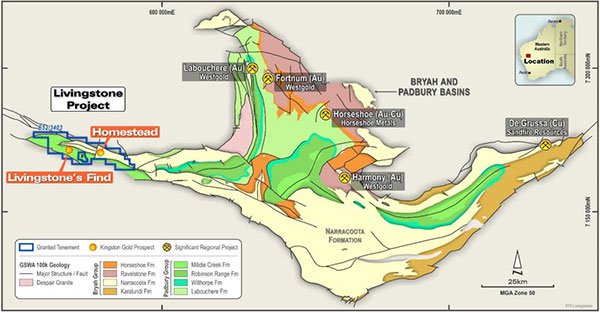 The 100ppb surface gold anomalies cover more than four kilometres of strike along the southern margin of the Narracoota Formation on the Stanley trend, as well as anomalies two to three kilometres in length, striking parallel to lines of old workings at Livingstone’s Find.

Stratigraphically, the setting is similar to that at the Labouchere and Fortnum gold deposits, which are less than 80 kilometres away and can be seen on the above map.

As with all minerals exploration, success is not guaranteed — consider your own personal circumstances before investing, and seek professional financial advice.

Further auger drilling was completed in March to extend the 2017 coverage around Livingstone’s Find to the south, and to the northwest along the prospective margin of the Narracoota Formation.

A small auger grid has also tested for gold anomalism around the Winja prospect, which contains high-grade intersections in RC drilling such as 18m at 7.85g/t but with little to no exploration along strike.

KSN Managing Director Andrew Corbett said, “With drilling getting underway at Livingstone as well as Misima Island, this is the start of a very busy time for Kingston. We are looking forward to testing these auger anomalies at Livingstone’s Find, particularly given the high tenor of some of the auger results last year. With gold in the geochemistry, prospective stratigraphy, and numerous old workings throughout the area, we think this is an outstanding exploration target”.