Hot Chili (ASX:HCH) has announced drilling results for its Valentina high-grade copper mine, along with its strategy to accelerate confirmation and definition of multiple high-grade copper resource opportunities close to its flagship Productora copper project in Chile.

Recent results already confirmed a large extensional discovery at the San Antonio copper mine, located ~5km south of Valentina, which provide further confidence in HCH’s ability to build a stable of high-grade additions to its bulk copper asset, Productora.

Additional credits up to 22g/t silver were also recorded.

The below maps outline the location of significant intersections in relation to the Valentina mine area and surrounding potential. 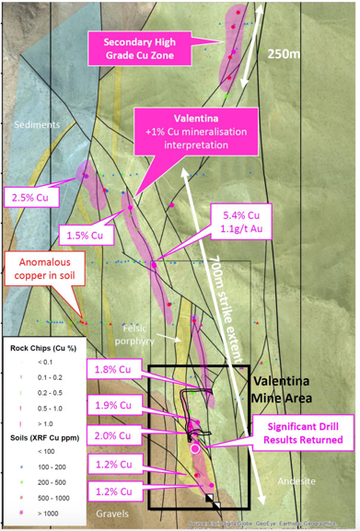 Detailed compilation and exploration work by HCH in the lead up to drilling at Valentina had indicated:

The latest drilling has confirmed that high grade sulphide copper mineralisation extends from near-surface and is associated with chalcopyrite and bornite.

Mineralisation reportedly intersected in historical drilling has been successfully located and is interpreted to be fault-hosted, dipping steeply towards the east within a sequence of volcanic-sedimentary units, similar to the deposit setting of San Antonio located 5km to the south.

Now the company is undertaking follow-up and Resource definition drill planning is being finalised ahead of submission of regulatory applications to drill.