Discovery of multiple surfaces of gold mineralisation at Irvine prospect

Navarre Minerals (ASX:NML) has updated the market following the receipt of further results from drilling at its Stawell Corridor Gold Project located 15 kilometres south of Stawell in Western Victoria.

Promising results have been delineated from both the East Flank and two surfaces on the western side of the Irvine basalt in reconnaissance drilling.

While exploration is at a very early stage, substantial news flow is expected in 2017 as exploration activities are undertaken along the 8 kilometres long Irvine basalt dome.

However, potential investors should note that NML is still in early stage exploration mode and therefore any decision with regards to adding this stock to your portfolio should be taken with caution and professional financial advice sought.

The significance of recent drilling results in the context of the group’s near to medium-term exploration plan was spelt out by the company’s Managing Director, Geoff McDermott in saying, “In our recently completed drilling program which has been testing to an average depth of 45 metres from surface, we recognise similar rocks and gold mineralisation styles as occur nearby in underground mining at Stawell’s 4 million ounces Magdala gold mine.” 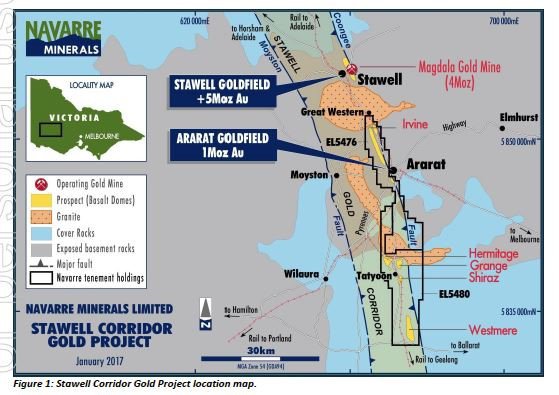 McDermott said the company was also looking to advance its exploration program to the south over the full extent of the Irvine basalt dome, situated beneath the 1 million ounce alluvial gold footprint of the Ararat Goldfield.

Shares in Navarre more than doubled between October and December under robust volumes, and while they have pulled back in the last month, they are still trading at a premium of more than 200% to the 12 month low.