CXO wraps up 100% ownership of Albarta 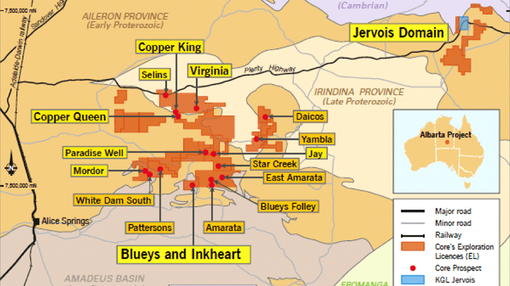 Core Exploration (ASX:CXO) has completed the tenement acquisitions that take it to 100% ownership of the Albarta Project that covers over 2,000km2 near Alice Springs in the Northern Territory.

Given the exploration results received to date across the Albarta Project, the acquisition of the remaining interest in these tenements gives CXO the ability to appropriately manage the multi-commodity exploration strategies that are evolving.

After 2 years of building a position in this new exploration province, CXO is entering the drill focused, discovery phase.

CXO has multiple drill programs planned in the Northern Territory with current reverse circulation drilling at Inkheart and Blueys, to be followed by further drilling at the Copper Queen and Virginia prospects.

Activities at Albarta are consistently finding new outcropping mineralisation and generating drilling targets in this prospective jurisdiction, which is located only 100 kilometres from gas, rail and power infrastructure.

A number of the Albarta Project tenements were previously subject to two separate joint ventures with different participants in each.

In February, CXO revealed that it had entered into an agreement with its joint venture partners to purchase their respective interests via consideration of 10 million CXO shares each. Of these, 50% are escrowed for 6 months and 50% for 12 months.

Upon registration, CXO will own a 100% interest in all 14 fully granted tenements in the Albarta Project area.

CXO shareholders now have complete upside to the results and news from multiple drilling programs over the next few weeks and months.

In addition to Albarta Project in the Northern Territory, CXO holds substantial IOCG interests near BHP in South Australia.

CXO is in discussions with a number of Australian and international parties who have expressed interest in this area.

A recent review geophysical surveys and historic drilling confirmed that IOCG mineralisation has been intersected at multiple prospects in the region.

CXO is also the only small cap explorer with ground in between Olympic Dam and the Woomera Protected Area.