CXO to drill Pilangoora lookalike in the next quarter

Core Exploration (ASX:CXO) thinks it has its foot on a lithium pegmatite target which is “unusually large” by world standards and is similar in scope to Pilangoora in WA.

It told its shareholders today that it had found large pegmatite swarms within its Finnis Lithium Project in the NT, and it plans to drill there as soon as the next quarter.

It said mapping had identified the Zola Pegmatite, which is a north-south trending system of pegmatites covering an area which CXO said is “conservatively estimated at between 1-2 square kilometres”. 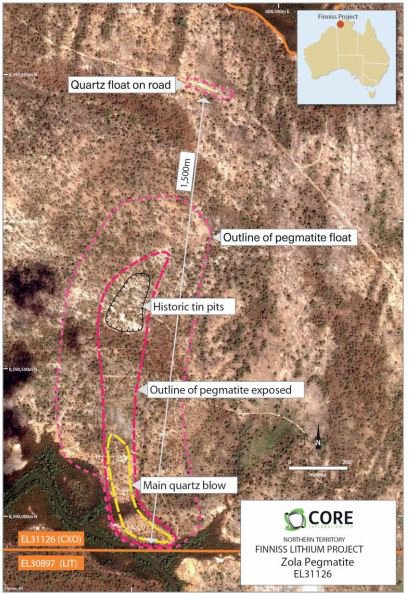 It said an outcrop of decomposed pegmatite and quartz blows for up to 1500m north-south and could be as long as 2km under cover.

East-west it said the pegmatite for at least 450m at surface – suggesting a substantial swarm of highly fractionated pegmatites.

The area has traditionally been associated with tin and tantalum, and CXO believes little work has been done to uncover the lithium potential of the area.

It did however say the potential scale of the pegmatites drew an immediate comparison with the Pilangoora area in WA – which has been pegged as a lithium hotspot.

CXO has started mapping at the area and is currently sampling – but has already lodged a drill application with the regulator, allowing it to possibly drill in the next quarter.

In more recent times however it has turned its attention to lithium in the Northern Territory as it joins a swathe of juniors seeking their piece of the explosion of interest in the commodity in recent times.

Lithium is being read as one of the fundamental building blocks of the lithium-ion battery revolution, which is underpinning the development of electric vehicles and next-gen battery storage.