Core Exploration Ltd (ASX:CXO) has announced a Resource upgrade for its Grants Lithium Deposit within its 100% owned Finniss Lithium Project in the Northern Territory.

The company also announced to shareholders that it will re-commence its drilling campaign at the Finniss Lithium Project, to underpin a long-life lithium mining and production business.

The Grants Lithium Resource defined comprises 2.0Mt at 1.5% lithium and is one of the highest grade spodumene resources in Australia.

CXO is now in the final stages of completing a Pre-Feasibility Study for the development of a spodumene concentrate and direct shipping ore operation on site.

The company expects to deliver its PFS findings later this quarter.

CXO is working with the NT EPA to finalise the terms of reference for an Environmental Impact Assessment (EIA), following which, the Company will prepare and submit a Mining Management Plan (MMP) for the development of the Grants project.

Based on projected timeframes for assessment by the NT EPA, CXO expects the environmental assessment process to take up to 12 months for the Grants project.

The company also indicated that it will execute a full feasibility study for the development of spodumene concentrate production from Grants this year (such as that at BP33), aiming to complete regulatory approvals and commence production in 2019. A Maiden Resource estimate for BP33 is expected later this month.

About the Grants Lithium Deposit

The Finniss Lithium Project is close to grid power, gas and rail and can be accessed by sealed road to Darwin Port – Australia’s nearest port to Asia.

Over 100 pegmatites are known within clustered groups or as single bodies, with individual pegmatites varying in size from a few metres wide to several hundred metres long.

Fresh pegmatite at Grants is composed of coarse spodumene, quartz, albite, microcline and muscovite (in decreasing order of abundance). 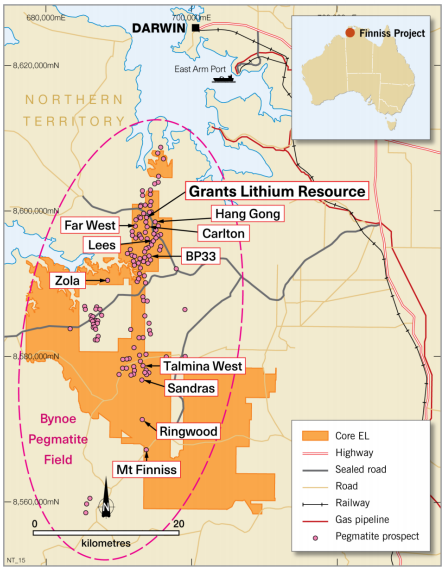