WA-focused gold exploration and development company Classic Minerals Limited (ASX:CLZ) has completed its latest drilling campaign at its Kat Gap project which is part of the Forrestania Gold Project (FGP) in Western Australia.

In this round of drilling at Kat Gap, the company increased its planned drill holes from 12 to 18 based upon multiple instances of promising mineralised zones and visible gold in a number of drill samples.

Previous drilling results from Kat Gap confirms the discovery of a significant new zone of gold mineralisation within the granite which was previously thought to be barren.

Drilling at Kat Gap also showed that high-grade gold mineralisation has effectively dammed up against a cross-cutting Proterozoic dyke.

CLZ CEO Dean Goodwin stated, “The Forrestania Gold Project continues to deliver fantastic results for Classic and its shareholders. We encountered high grade zones of mineralisation at each of the drill targets which all remain open along strike with high priority zones requiring urgent follow up.

“Kat Gap is shaping up to become a prolific shallow high-grade gold deposit with so much remaining upside potential. We have only tested >200m of 3.5km of potential strike along this granite-greenstone contact and received excellent gold grades from 11 of the 12 holes previously drilled. During this programme, after recognising encouraging mineralisation in the drill samples, I decided to increase the number of drill holes from 12 to 18 with the goal of extending the mineralised zone at the granite/greenstone contact.

“We also decided that further drill testing into the granite, which in our previous campaign, yielded surprising high-grade gold intervals, to gain further understanding of the mineralisation in this zone. Hole FKGRC034 was located 150m “in” the granite, away from the main mineralised contact zone.

“These new results bode well for the whole Forrestania project given that the main granite-greenstone contact, of which we have 40 km of strike, has been largely overlooked. I’m quite confident that new, high-priority gold targets will come to light elsewhere within the project area,” he said.

CLZ drilled 18 holes for ~1600m at Kat Gap and is pleased to confirm that holes returned promising mineralisation striking in a north-south direction. The drilling was extending the 140m strike zone and testing the extent of the granite mineralisation.

The majority of the drilling was focused on testing the main granite-greenstone contact which has been the sole focus of drilling since the prospect was discovered by previous holders. A few holes were also drilled up against the cross-cutting Proterozoic dyke where high-grade gold mineralisation is believed to have concentrated.

This targeting was largely based on the success of the previous drill campaign where CLZ saw highlights such as the following: 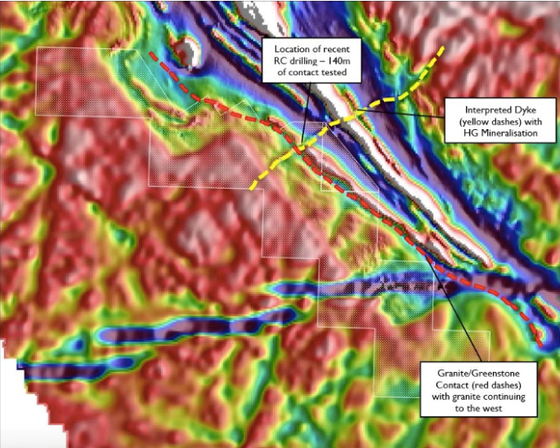 It should be noted that a number of holes in the current campaign were drilled relatively close to the Proterozoic dyke to confirm and extend CEO Dean Goodwin’s theory that gold is concentrated up against the dyke.

With the promising mineralisation returned from these holes, CLZ will continue to track mineralisation against the dyke and follow it down plunge. It is currently believed that two high grade gold shoots exist either side of the Proterozoic dyke contact.

The strike and down-plunge extent of these shoots will be better understood after assays are returned. In addition, further step out drilling into the granite has been undertaken as part of this campaign to help determine the extent, style, grade of mineralisation hosted in the granite.

Previous explorers in the area have assumed that the granite surrounding deposits/prospects is barren. The discovery of granite-hosted gold at Kat Gap is significant as the same geological setting may be repeated elsewhere throughout CLZ’s significant landholding of more than 500 square kilometre.

The company will continue to track this unexpected high-grade granite-hosted gold mineralisation in its upcoming drill program at Kat Gap and elsewhere throughout the project area. CLZ has already planned follow up drill holes at Kat Gap to be commenced in September and has mobilised the drill rig to Lady Lila and Lady Magdalene for the remainder of this current campaign so there should be steady news flow for the coming weeks/months.