Factoring in historic assay results of up to 17.7% zinc, 12% copper, 8.2% lead and 1,200ppm cobalt, and changing market dynamics, CCZ has broadened its focus at the project to polymetallic mineralisation.

A follow-up site visit by the geology team to the “Area 1” prospect, which is on the western border of the Broken Hill project, indicate the ground has potential for polymetallic mineralisation, and therefore warrants further scrutiny.

Assays from 106 rock-chip samples from outcropping Himalaya Formation returned excellent results with up to 1440ppm cobalt and 23,700ppm copper within an anomalous zone within the “Area 1” prospect, as outlined in the map below. 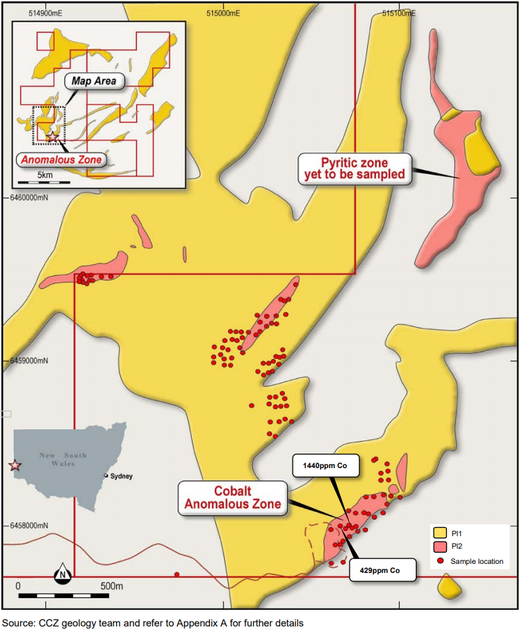 From here, CCZ’s next steps involve a field trip to commence incremental detailed mapping and further surface sampling across known and prospective targets in order to boost the geology team’s understanding of the polymetallic mineralisation potential within the tenure.

“Having reviewed legacy assays and changing market dynamics, the Board has decided to broaden the exploration focus at Broken Hill from cobalt to include copper, zinc and lead mineralisation, given CCZ has full mineral rights and owns the tenure outright.

“As such, further site visits will be undertaken by the geology team to identify prospective areas for polymetallic mineralisation. However, this will not distract the Board from its current core strategic objective to re-open Cangai Copper Mine.”