Castillo Copper Limited’s (CCZ:ASX) Board has provided an update on the geology team’s findings from the soil and rockchip sampling undertaken to the east of the line of lode at Cangai.

“Clearly, the Board’s core objective is to expand the known mineralised footprint and rock-chips grading up to 23.9% copper & 55.5g/t gold certainly verify there is a potential north-east extension to the line of lode.

CCZ advised that the significant soil and rock-chip sampling work by the geology team has uncovered a potential high-grade extension to known mineralisation at the eastern end of the line of lode.

Of these, the reading from the Canberra anomaly is a significant potential indicator of sub-surface mineralisation and will be prioritised for the next broader infill sampling program.

Incrementally, while mapping historic workings — including shafts, adits and trenches across the eastern portion of Cangai — several rock-chip samples were collected from mine tailings that were mineralised or gossanous.

These were assayed and returned excellent readings up to 23.9% copper and 55.5g/t gold, which provides further supporting evidence there is a potential extension to the known mineralised footprint. 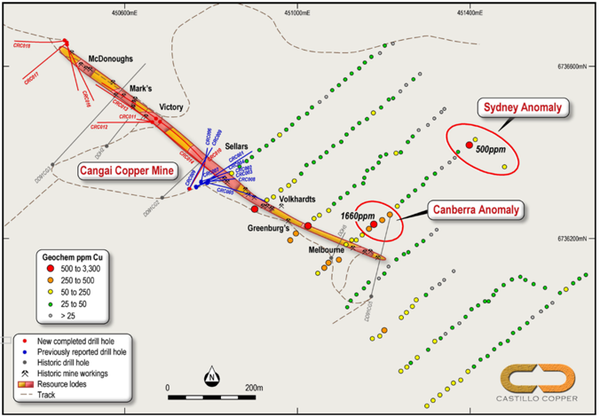 Yet it remains a speculative stock and investors and investors should take a cautious approach to any investment decision made with regard to this stock.

Following the discovery of high-grade massive sulphides in drill-hole CC0023R, which returned assay results of 11m @ 5.94% copper, 2.45% zinc and 19.13 g/t gold — the Board’s focus has switched towards expanding the known orebodies.

Utilising DHEM surveys will aid optimising the remainder of the current drilling campaign, which should potentially deliver extensions to known orebodies. The below graphic bundles all significant intersections recorded so far from the two drilling campaigns undertaken. 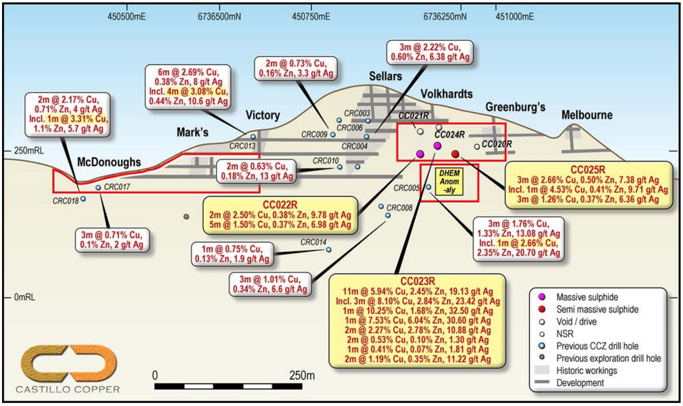 The company advised that broadening the soil sampling program may potentially unearth new areas extending from the line of lode, that warrant closer scrutiny.

Of note is the fact that since mining operations ceased early last century there has been negligible exploration activity, which clearly underscores the upside potential across the Cangai copper tenure.

Several members of the geology team visited the Cangai east area, including Volkhardts, in late April 2018 and discovered historic workings that are not fully documented.

The terrain is quite steep and canopy think, which prevented using a drone to find workings. The team made several observations, including: 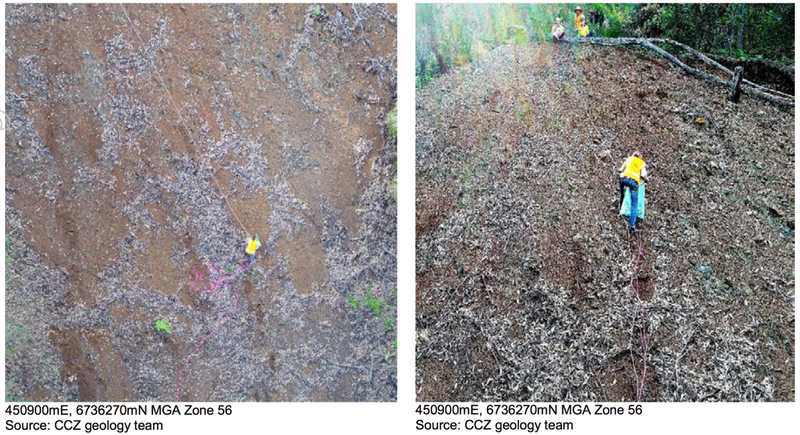 What’s next for CCZ at Cangai

Recommence DHEM surveys and drilling program (including diamond drill rig) should deliver metallurgical samples. CCZ will look to provide an update on its Broken Hill project.

The Board is progressing with its strategic objective of monetising legacy stockpiles, after metallurgical test-work confirmed copper concentrate recoveries >80% and grade up to 22% copper.

CCZ now intends to request official guidance from the regulator on the pathway to remove the historic stockpiles for processing by third parties.