Can PRL take Zero Carbon Hydrogen to the world?

PRL has entered into a conditional agreement to acquire a company which holds seven license applications in the Gascoyne region of WA, which are suitable for developing a renewable green hydrogen project.

PRL is aiming to be Australia's first truly Zero Carbon Hydrogen (a term it has trademarked) producer.

The result would create a clean zero carbon Gas or Liquid Hydrogen Fuel that according to Andrew Twiggy Forrest “could power the world for all of mankind’s existence”.

According to Forrest, by 2050 green (renewable) hydrogen could be the most important green energy source in the world.

“The green hydrogen market could generate revenues, at the very least, of $US12 trillion by 2050 — bigger than any industry we have now,” Forrest says.

There are several fundamentals now driving PRL in this ambitious aim:

A new push for hydrogen solutions: Is PRL at the forefront in Australia?

The days of using hydrogen as an ingredient for industrial processes will soon be behind us, as will, potentially, hydrogen made from fossil fuels.

Green hydrogen, generated from wind and solar, and which has so far been ignored by the economic world, could fast track the fight against climate change.

Australia’s Chief Scientist Dr Alan Finkel AO who was also Chair, COAG Energy Council Hydrogen Working Group said, "The potential to export clean hydrogen is substantial, with the International Energy Agency and the World Energy Council both identifying Australia as a potential hydrogen production powerhouse. We can become a leader in the new industry I call 'shipping sunshine', with our hydrogen exports being additional to our other energy exports."

Forrest explains that, “If we wait until 2050 to act, our planet will be toast... Green energies need to be available at an industrial, global scale — and at a price that competes with fossil fuels.

“When fossil fuel energy becomes more expensive than renewable energy, that's when we'll reach the tipping point. That's when the world will begin the journey in earnest to become zero-carbon.”

It is handy to know that Australia is already on the case. Not only through Forrest, but also through government bodies such as the Australian Renewable Energy Agency (ARENA).

ARENA has been taking a long hard look at hydrogen projects believing it could be out next great export: 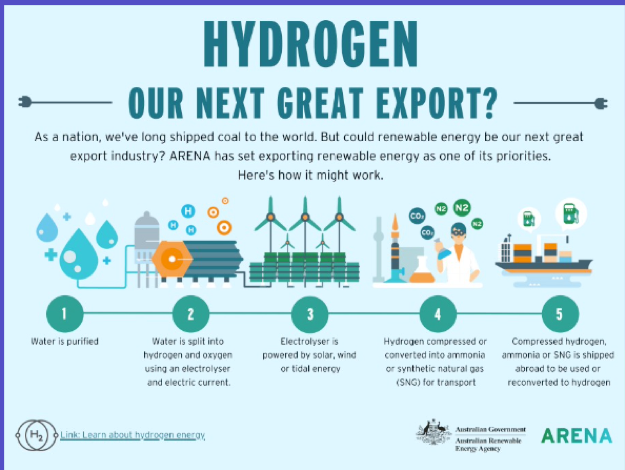 Here’s what ARENA is looking for in a hydrogen project: 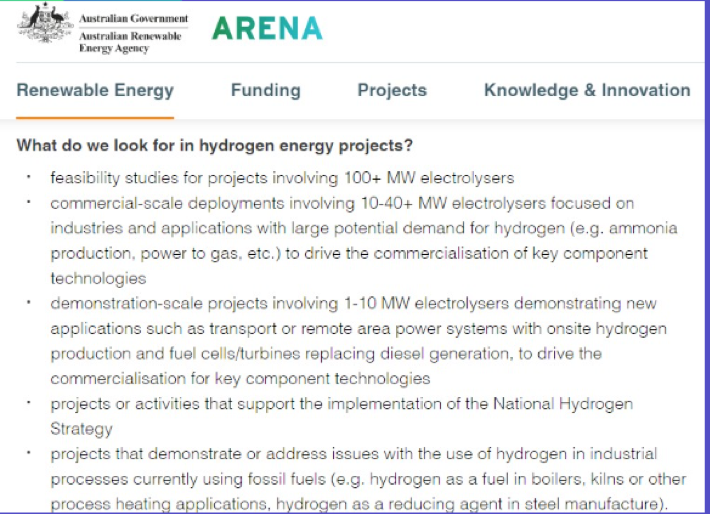 It would seem that PRL could fit the bill.

There has been plenty of investment by the WA government of late in WA hydrogen projects:

So much so, the state has developed its own roadmap. Here’s a look at the investments made so far: 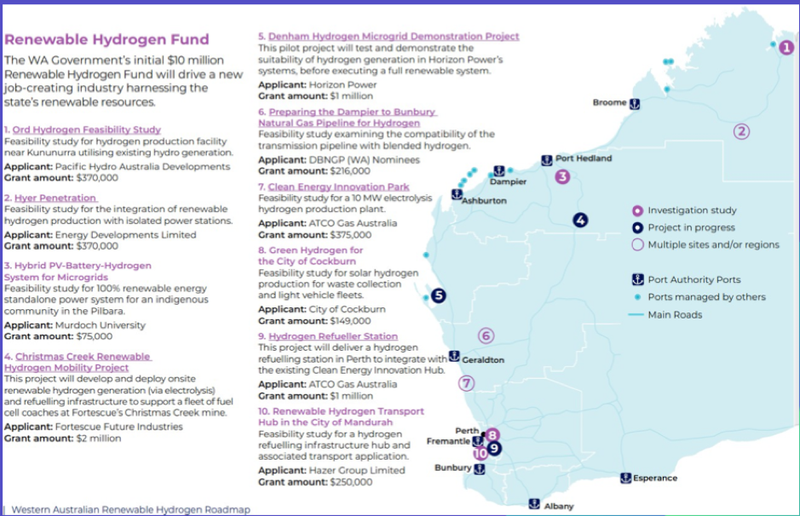 The WA state government isn’t the only body, investing.

In the last financial year, NAIF made 11 investment decisions worth more than $1.4billion, focusing on driving public benefit, economic and population growth and Indigenous involvement in northern Australia.

NAIF can lend up to 100% of the debt and has a higher tolerance for the unique risks of investing in northern Australia including but not limited to, distance, remoteness and climate.

It is early stage, but PRL has a well-laid out plan of its own that should attract investor attention and funding.

The good news is that it has plenty of test cases to draw on.

Renewable hydrogen in WA is a big ticket item

Province isn’t the only enterprise eyeing off the development of a renewable hydrogen project in Western Australia, but it is the only ASX listed junior.

However, the other players are large in size and well advanced with studies that have proven even greater capacity can be achieved than originally thought.

The Pilbara project is positioning itself to be in prime position as the green hydrogen export market takes off over the next decade or two, targeting a renaissance of Australian industry based on cheap and clean power, and also demand from power-hungry north Asian economies such as Japan and South Korea.

They have limited domestic renewable energy sources and find themselves between a rock and a hard place in terms of decreasing their reliance on both locally produced and imported fossil fuels.

There are also plans to develop a massive new renewable hydrogen production facility near Kalbarri in Western Australia, with up to 5,000MW of combined solar and wind projects to supply it.

This has the backing of Denmark Copenhagen Infrastructure Partners (CIP), and Hydrogen Renewables Australia has agreed to partner with CIP on the massive project, which is proposed for the Murchison House Station on the state’s mid-west coast, an area identified by engineering firm AECOM as a prime position for the co-location of wind and solar projects in Australia.

The goal of the project is to use the premium solar and wind energy resources, along with desalinated sea water, to produce renewable hydrogen to Asian markets, with an eye to Japan and Korea.

It is worth noting that Asian investment is central to the aforementioned projects and further it would seem that they also represent the likely destination for the end commodity.

However, let’s not forget the current spat with China, so an Australian built project that commits to supplying Australian consumers first would be a great vote winner.

Stage 2 – Gas blending, scale up project to supply into the nearby Dampier Bunbury Natural Gas Pipeline. With the aim of helping meet the State Government’s objective of up to 10% green hydrogen in the DBNGP by 2030.

Stage 3 – Export, full scale production to supply Asian markets. Develop a Liquified Hydrogen and or Ammonia Loading Facility in the Carnarvon area. Subject to customer needs hydrogen offtake could be either in the form of ammonia or liquified hydrogen.

Stage 2 is an interesting one as the optimum end-game would be full-scale production to supply Asian markets, as well as multiple markets in Australia.

Ports, cities, regional and remote areas will all be considered, and will provide the industry with its springboard to scale.

Hubs are designed to make the development of infrastructure more cost- effective, promote efficiencies from economies of scale, foster innovation, and promote synergies from sector coupling.

These will be complemented and enhanced by other early steps to use hydrogen in transport, industry and gas distribution networks, and integrate hydrogen technologies into our electricity systems in a way that enhances reliability.

PRL wants to create a hydrogen hub at Carnarvon that will contribute significantly to the national, state and local objectives for new investment, new jobs, renewable energy sources and new export markets.

Green hydrogen holds a place at the table in Australia's future

It is a clean-burning molecule that can help to decarbonise a range of sectors that are difficult to clean up. Thus, green hydrogen produced from renewable electricity, could be the solution to cutting our carbon footprint.

This next video explains how Australia could lead the world in green hydrogen production and distribution.

This ABC article is also worth reading:

PRL is looking to become an Australian leader in green hydrogen production, through its Zero Carbon Hydrogen ProjectTM. It would be the only ASX listed junior to do this, giving investors an excellent early entry point into this growing market.

And as mentioned, PRL is setting up in the perfect location.

The Gascoyne region in Western Australia has world class solar and wind resources and significantly, those resources are perfectly complementary, with high incidence of sun during the daytime and high wind speeds in the morning, evening and night. This enables competitively priced predictable and firm renewable electricity output, 365 days a year. 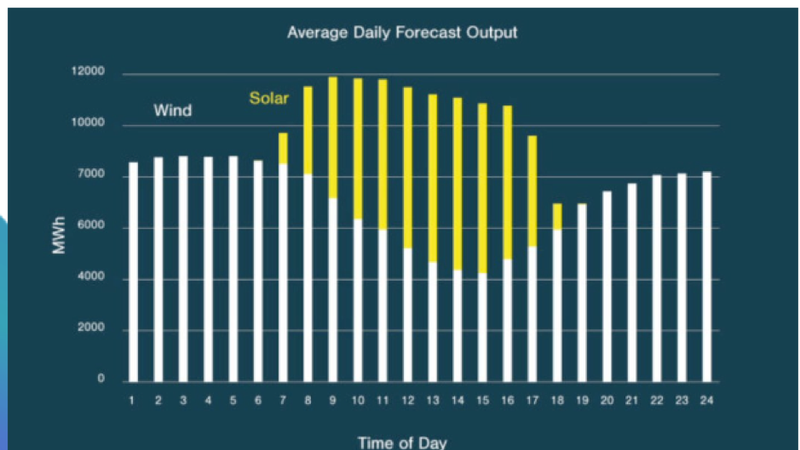 Carnarvon has an annual mean windspeed of 25.5 km/h, making it the top 4th windiest location in Western Australia.

Further to this, existing windfarms at Denham and Coral Bay are operating proof of concept in the Gascoyne region.

The other reason is the regions solar profile.

PRL is an early stage play, however there is a real opportunity for it to take the reins in providing an all Australian green hydrogen solution that could have worldwide impact.