Caeneus Minerals (ASX: CAD) informed the market on Monday morning that it had received approvals from the Bureau of Land Management, enabling it to commence a drilling program at the group’s Lida Valley lithium brine project located in Nevada.

Following approval, management said that it is now in advanced discussions with potential drilling contractors who have significant experience in exploring for brines in the Nevada area, including work for Rockford on the Silver Peak Mine, and recently for Iconic Minerals, with the latter being particularly significant in terms of recent developments at its Bonnie Claire project.

CAD noted a fortnight ago that Iconic had announced geochemical results of drill cuttings at Bonnie Claire containing highly anomalous lithium. The Bonnie Claire property is located immediately to the north of CAD’s Scotty’s South project, and the fact that they have discovered lithium in drill cuttings of up to 1410 ppm lithium has provided enthusiasm that CAD’s project may have similar geological features.

However, at this stage CAD remains a very early stage exploration play in the lithium sector and investment decisions should not be made on the basis of prospective exploration success. Seek professional advice if considering CAD for your portfolio.

As CAD pointed out, even news flowing from its peers needs to be fully assessed as it needs to be proven that there is the existence of lithium contained within brines from leaching into fluids over time.

More specifically, it interprets that Montezuma Peak which lies between the Clayton Valley’s Silver Peak Mine and Lida Valley is representing a potential source of lithium within the region. On this note, Montezuma Peak has been the interpreted source for the lithium located in brine discoveries in the Clayton Valley and it interpreted that Lida Valley represents the southern migration of this flow.

These underlying assumptions contribute to the group’s strategy regarding its drilling program which will include five drill holes as outlined below. However, management said that it will be progressively analysing data from each hole drilled and the exact location of subsequent drill holes may change throughout the course of the program. 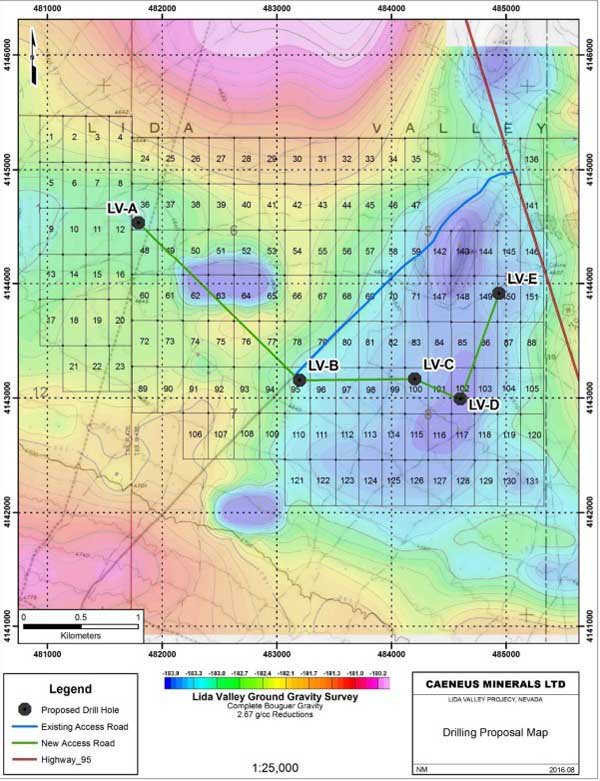