Caeneus Minerals (ASX:CAD) advised on Thursday that the company has just commenced a drilling program at its 80 per cent owned Pardoo project located in Western Australia.

A total of ten reverse circulation (RC) drillholes are planned with a view to testing the priority 1 targets for a total of approximately 1600 metres. This drilling should be completed by early November with results to be announced as they become available.

The Pardoo Project is already known to host the Highway deposit containing 50 million tonnes grading 0.3 per cent nickel, 0.13 per cent copper and 0.03 per cent cobalt. Geophysical data has indicated the probable presence of a large mafic-ultramafic intrusive complex with potential for higher grade nickel-copper mineralisation.

However this is still an early stage play for CAD and investors should seek professional financial advice if considering this stock for their portfolio.

As indicated below, the proposed intrusive complex is situated in a similar structural setting, adjacent to a major, regional shear zone, as other significant nickel copper occurrences such as Radio Hill and Sherlock Bay. 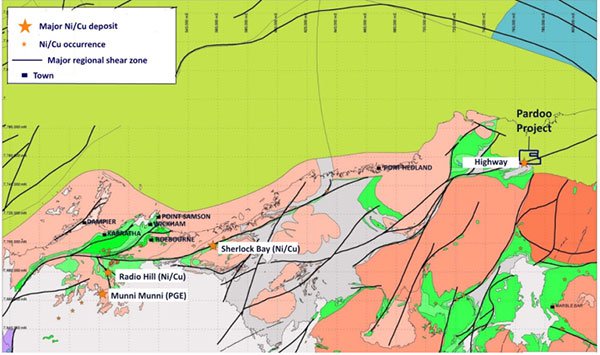 Although originally acquired as a nickel property, research has determined that the Pardoo Project also hosts considerable potential for economic gold mineralisation. A drillhole completed by the previous joint venture partner Mithril Resources beneath the Highway nickel-copper deposit intersected gold grading 5.18 grams per tonne over 1.5 metres.

This mineralisation remains open along strike and at depth. In addition, the major shear zone that traverses the property is a continuation of the Tabba Tabba shear zone which is known to host a number of significant gold deposits to the south-west.

The Highway nickel-copper deposit and the Supply Well zinc-nickel deposit which delivered drill intercepts of 1.9 per cent nickel and 17 per cent zinc respectively both illustrate that hydrothermal processes have been active in the project area, and management noted that gold mineralisation is usually the result of hydrothermal processes.

Due to the sediment cover of the Canning Basin, the area has not previously been prospected or explored for gold mineralisation. Consequently, CAD remains confident that the current drilling program has an excellent chance of intersecting significant mineralisation, either nickel-copper, base metals or gold.