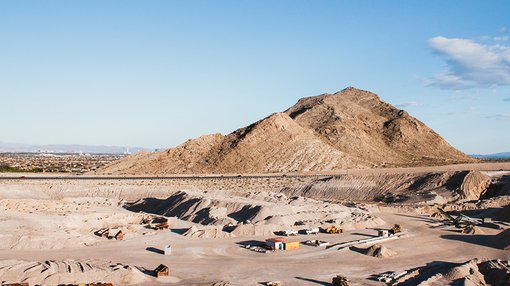 The project is located 100 kilometres south of Fairbanks in central Alaska, USA, and comprises 224 mining claims over a total area of 143 square kilometres. It contains polymetallic VMS mineralisation rich in zinc, silver and lead, and also with significant gold and copper.

DJ Carmichael’s has tagged WRM as a ‘Speculative Buy,’ with a 6 cent per share valuation attributed to the Red Mountain Project alone.

Of course, it should be noted that broker projections and price targets are only estimates and may not be met. Also, historical data in terms of earnings performance and/or share trading patterns mentioned in this article should not be used as the basis for an investment as they may or may not be replicated.

The broker’s independent valuation comes after the release of an initial JORC 2012-complaint Mineral Resource Estimate (MRE) for the Red Mountain Project in April this year, of 16.7Mt at a zinc equivalent at a grade of 8.9 per cent.

The Broker notes that the project’s high grade component of 9.1Mt at 12.9% zinc equivalent (using a 3% zinc cut-off grade), places Red Mountain as one of the highest grade and more significant deposits of any zinc company on the ASX.

It says the project’s Resource “immediately places Red Mountain as an important VMS asset within a global context and one that stands as a peer to the more well-known deposits such as Heron’s Woodlawn deposit and Red River Resource’s Thalanga project.”

Yet WRM remains a speculative play and investors should seek professional financial advice if considering this stock for their portfolio.

Using transactional-based and peer analysis-based methodologies, plus the Rule of Thumb check, the broker delivered a valuation for the Red Mountain Project of A$52.9 million.

It sees significant potential to increase the resource base from numerous, untested, high priority exploration targets. Noting, that given the propensity of VMS deposits to occur in clusters, over time, the project’s resource base will grow beyond the current 16.7Mt.

The broker compared the size and tenor of the Red Mountain mineralisation to a range of ASX-listed zinc-dominant polymetallic VMS projects. As you can see below the Red Mountain deposits stand up well against more widely known peer projects that provide the basis for substantial market capitalisations of their owner groups. 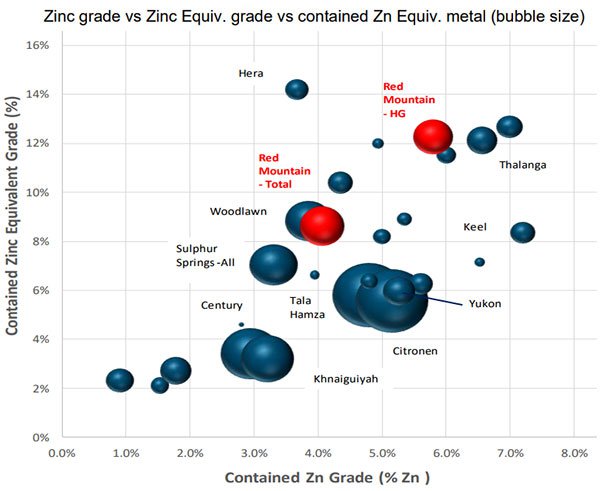 It also found that the project’s Enterprise Value (EV) is low compared to its peers, with its grade close to being best in class. Here’s a comparison of EV per zinc equivalent with zinc equivalent resource grade for WRM and its peer group. 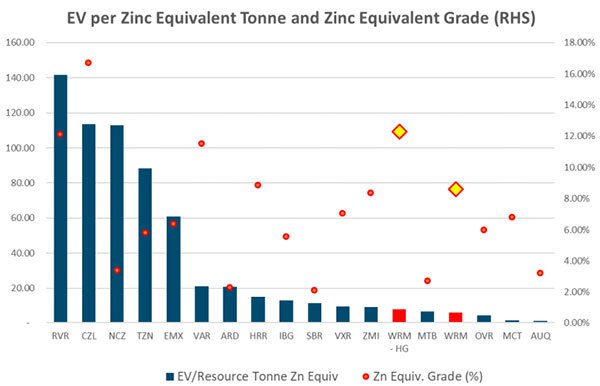 DJ Carmichael’s valuation report is the second independent valuation of the project in recent months. In July 2017, Independent Investment Research (IIR) published its own research report. IIR also valued the Red Mountain zinc-silver project at 6 cents per WRM share, or $52 million, within a range of $30 to $66 million.

With dual independent valuations estimating the Red Mountain Project alone at 6 cents per share, WRM is currently trading at what could be an appealing discount, at just 1.5 cents per share.

And that’s not even attributing any value to WRM’s 100% owned Mt Carrington gold-silver project in northern NSW, which has a Resource Estimate totals of 0.34Moz gold and 23.5Moz silver. An updated PFS for Mt Carrington is scheduled for later this year, which DJ Carmichael’s suggest could “significantly increase the fundamental value of that project”.

Adding to that, the broker has the view that the application of modern exploration techniques and a well-designed and executed drill program in 2018 could add significant value to the Red Mountain project, and in turn, the value of WRM as a whole.