BlackEarth Minerals NL (ASX:BEM) has taken a major step in its strategy to fast-track the development of its Maniry Graphite Project in Southern Madagascar, completing its maiden JORC-compliant mineral Resource estimation for the Razafy graphite deposit.

As BEM revealed this morning, the Razafy Resource sits at 11.2 million tonnes at 7.1% total graphitic carbon (TGC) for 795,200 tonnes of contained graphite.

The majority of the Resource has been classified as ‘Indicated’ category, and has been broken down as follows:

There is a substantial opportunity here for BEM to grow its graphite Resources through exploration of the high-grade Razafy Domain.

The Resource estimate is the culmination of BEM’s 74-hole, 5,371 metre diamond drilling program at Razafy, which was completed earlier this year and will form the foundation of ongoing scoping study activities, which have been progressing in parallel with the Resource estimation process.

A summary of the Resource:

Alongside its Resource, BEM has also established non-JORC exploration targets for the Maniry Project.

Meanwhile, the Maniry scoping study remains on schedule for completion in the fourth quarter of the year – this, in turn, will pave the way for a feasibility study (FS), which will be completed in 2019.

To that end, BEM will be commencing its next phase of exploration in the fourth quarter, with the aim to delineate further high-grade graphite within the Razafy Domain proximally to the high-grade Razafy graphite deposit.

BEM Managing Director, Tom Revy, commented: “This is a great milestone for BlackEarth. Following the IPO in January this year, we have delivered the maiden Resource within seven months of listing. This Resource has delivered a high grade of graphite with favourable mineralogy.”

“I look forward to growing the resource and commencement of our next major deliverable: the scoping study,” added Revy.

The Razafy Resource is recognised as being part of a much larger mineralised graphite system that has been defined by extensive and detailed programs of exploration, including geological mapping, rock chip sampling, trenching, drilling and airborne geophysical surveys (magnetics and VTEM).

BEM has now utilised these extensive, quality datasets to indicate the potential to significantly increase the mineral Resource in this area with additional drilling and associated activities.

Following this assessment, the Maniry Project now has an exploration target of 260-380 million tonnes at 6-8% TGC — this demonstrates the significant potential of the project.

The Maniry Project has been broken down into three regional domains of graphite mineralisation: the Razafy Domain, the Ivan Domain, and the Haja domain: 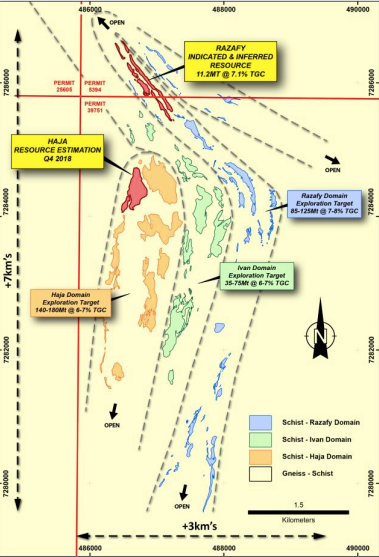 The Resource definition drilling at the Haja prospect is now complete. In total, 26 diamond holes were drilled for 2027 metres. Drill rigs are now in the process of de-mobilising from site, with BEM’s technical team in the final stages of cutting and sampling the diamond core.

Previous drilling at the Haja prospect has identified extensive thicknesses of graphite mineralisation including intersections of 70 metres at 5.3% TGC. 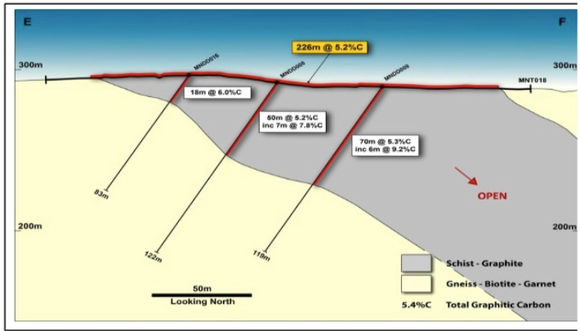 Following on from the maiden Razafy prospect Resource and its large-scale exploration target, BEM recognises the potential to consolidate the Maniry Project into a significant ‘camp’ of graphite mineralisation.

The Razafy Domain has been identified as a priority area for further exploration in the short term, as it represents the highest potential to host higher-grade accumulations of graphite mineralisation.

Areas of immediate focus include:

Of particular interest is a large, prevalent VTEM anomaly, which is situated in an interpreted fold nose position. Fold noses are well-known structural positions for high-grade graphite mineralisation. An example of this is the Molo graphite deposit (Next Source Materials – 141Mt at 6.1% TGC), which is situated 65 kilometre north of the Maniry Project.

BEM’s second graphite project in Madagascar, the Ianapera Project, is located along strike of Molo — exploration will also be undertaken here in the fourth quarter.