BlackEarth Minerals NL (ASX:BEM) has provided an update on the first batch of assay results recently received from the Haja resource definition drilling program at the Maniry Graphite Project in southern Madagascar.

These are from the first 5 holes from the recently completed 26-hole, 2026 metre diamond drilling program.

The remaining assays from the program are expected to be received over the coming 4 to 6 weeks.

BlackEarth intersected thick and consistent zones of graphite mineralisation in the first holes at Haja.

Release of maiden resource in 2018

A maiden JORC Compliant Resource estimation for the Haja graphite prospect is expected to be released to the market in the December quarter of 2018.

The first round of results demonstrates that the Haja ore body is thick and consistent with zones of high grade graphite.

Managing director, Tom Revy expressed his confidence regarding the prospects of the broader Maniry Graphite Project in saying, “Following recent completion of the drilling program at the Haja Prospect, Haja is considered to have excellent potential to host a large-scale, near-surface graphite resource which we expect to complete the resource estimation in Q4 2018.

“The large aerial extent, outcropping nature and in most cases flat-lying nature of the graphite mineralisation, continues to provide confidence that the prospects in the Maniry Graphite Project area can be readily upgraded to a JORC (2012) compliant resource.” 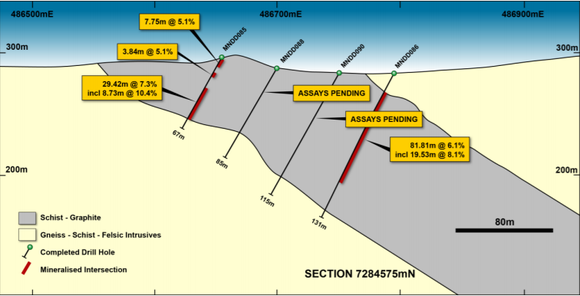 Initial assay results have shown mineralisation is open along strike to the north and open down dip to the east.

Although this remains a speculative stock and investors should seek professional financial advice if considering this stock for their portfolio.

The results have highlighted some unexpected zones of higher grade mineralisation including 19.5 metres at 8.1% TGC.

It is anticipated that a continuous zone of high grade mineralisation will be identified within Haja as further assays are received.

Drilling by the former project operator in 2014 previously identified broad intersections of mineralisation.

The Haja Deposit is one of many lenses within the Haja Domain, one of three domains identified within the Maniry Project, which it was determined in mid-August had an overall Exploration Target of 260-380 million tonnes with TGC ranging between 6% and 8%.