Shares in Berkeley Energia (ASX:BKY) have performed strongly in the last week, increasing from 79 cents to close at 87 cents on December 20, representing an increase of 10%. However, they are still trading well shy of most analysts’ price targets.

David Talbot from Dundee Capital Markets ran the ruler across the stock at the end of November, noting that the first offtake agreement for its Salamanca project located in Spain had been finalised with European commodity trader Interalloys Trading.

Talbot highlighted the fact that the initially announced volumes had doubled to £2 million over a five-year period and the average fixed-price may have increased slightly to US$43.78 per pound U308, at least from original guidance of US$41 per pound.

Given this backdrop he maintained a buy recommendation and price target of $2.50, implying upside of 190% to the company’s current trading range.

However, prior trading history may not be replicated and company/broker projections may not be achieved and should not be used as the basis for an investment decision. Those considering this stock should seek independent financial advice.

Berkeley looking even more attractive on the cost curve

News flow from the group has remained positive with Managing Director, Paul Atherley, yesterday commenting on the commencement of full construction early next year following the order of the first major items for the crushing circuit.

In an encouraging development, the final cost of equipment ordered was more than 20% below estimates stated in the Definitive Feasibility Study (DFS). 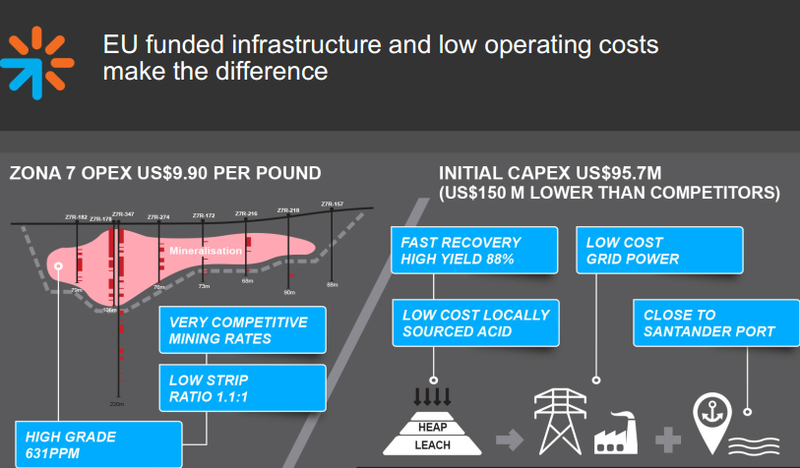 Given that Salamanca already sits at the bottom of the cost curve compared with its peers in terms of capital and operating costs, this news further enhances the project economics.

Summing up these latest developments, Atherley said, “The lower costs and shorter lead time associated with this key phase of construction moves Berkeley closer to its goal of becoming one of the world’s lowest cost uranium producers, reliably supplying long-term customers from the heart of the European Union”.