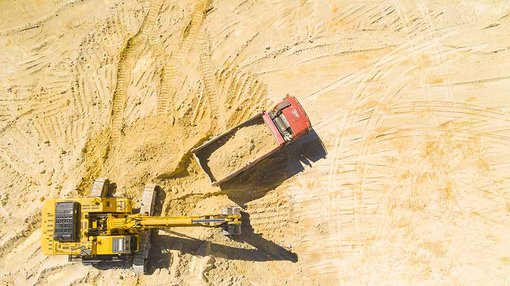 Emerging uranium producer Berkeley Energia (ASX | LSE: BKY) informed the market on Monday morning that it had signed a binding offtake agreement with Interalloys Trading Limited (Interalloys) for the sale of first production from the group’s Salamanca mine situated in Spain.

This represents an extension of an earlier agreement with Interalloys which was a Letter of Intent for the sale of up to 1 million pounds of uranium concentrate over a five-year period starting from the commencement of the mine and extendable thereafter by mutual consent. 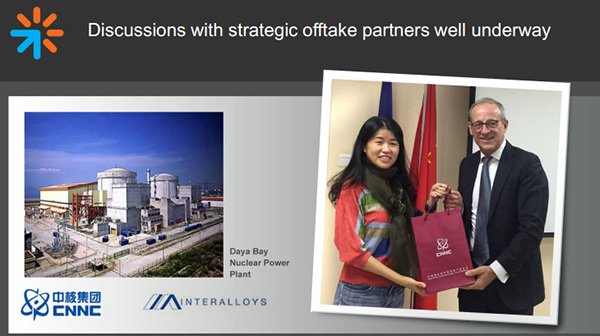 The binding offtake agreement not only provides more certainty, but the terms are better with the average price of US$41.00 per pound contemplated in the Letter of Intent now formalised at US$43.78 per pound.

Furthermore, the binding offtake agreement is for 2 million pounds over a five-year period with the potential to increase annual volumes further, as well as extend the contract to a total of 3 million pounds.

Is this a buying opportunity

Shares in BKY have surged in the last six months, increasing 50% from circa 60 cents in June to a five-year high of 90 cents in October, mainly driven by promising exploration results and the completion of a Definitive Feasibility Study (DFS) which confirmed Salamanca would be one of the world’s lowest cost producers when it comes on stream in 2019.

The fact that the company’s shares have retraced slightly, closing on Friday at 73.5 cents could represent a useful entry point for investors who missed buying into the story on the way up.

Those considering this stock shouldn’t make assumptions regarding exploration outcomes, nor should they base investment decisions on share performances to date. It could be argued that the company’s share price doesn’t account for the value of its asset or its potential upside and investors should seek professional financial advice if considering this stock for their portfolio.

Offtake agreements provide material certainty in terms of future revenues, which in turn presents other benefits such as easier access to capital.

Consequently, this is a very favourable development and one which should provide positive share price momentum. However, share price trends are impossible to predict and potential investors considering this stock should seek independent financial advice.

Berkeley in discussions with other potential offtake partners

Chris Brown from Morgans CIMB has a high opinion of BKY, commenting after the recent capital raising, “Salamanca has a long life, a stable European jurisdiction with Nuclear Fuel Cycle experience, a relatively low capital intensity in terms of pounds of U30 in resource and annual pounds of production”.

With the project fully permitted and with a low projected cash cost of US$15.39 per pound U308, he sees the project as being attractive to power utilities. His add recommendation is supported by a 12 month price target of $1.31, upgraded from $1.12 in November following the capital raising.

Brown flagged ‘sales and marketing initiatives’ as one of the potential catalysts for an increase in valuation. Given the size and pricing of this agreement it should have brokers sharpening their pencils.

The pricing implies strong margins and BKY’s Chief Executive Paul Atherley underlined this aspect of today’s development in saying, “We are delighted to have converted the previously announced Letter of Intent into a binding offtake agreement with Interalloys, including the doubling of contract volumes and with fixed pricing at US$43.78 per pound which would give us a very strong margin above our steady-state cash cost of around US$15.00 per pound”. 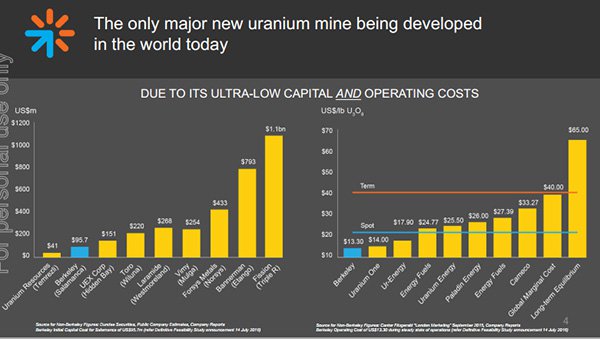 Salamanca positioned to sell into Europe, China and the US

Another comment made by Atherley that won’t be lost on investors is the fact that the group is currently in discussions with other potential offtakers in relation to contracts with similar terms to those outlined in the Interalloys agreement with pricing at or around long-term benchmark levels for term contracts.

Atherley conceded that uranium prices are likely to remain flat in the near term, but post 2018 when Salamanca comes into production an uptick in pricing is expected, as US utilities looking to re-contract will be bidding against Chinese buyers looking to secure supply of product for their new reactors. 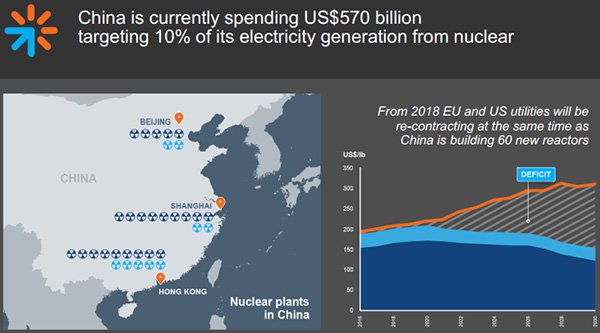 At the same time, the Salamanca project is ideally situated from a geographical perspective to sell into Europe where there is substantial demand for a low-cost producer.

BKY starts next phase of exploration to identify additional deposits