Renewable energy focused exploration group, Auroch Minerals (ASX:AOU), which is in the process of completing its maiden drilling program at the Tisová project in the Czech Republic has updated the market regarding progress on its third hole of a four hole drilling program.

All holes to date have intersected multiple zones of massive to semi-massive sulphide mineralisation within a wider sulphide halo as predicted in the 3D geology model. Hole TIDD003 intersected visible cobalt and copper minerals within a 130 metre thick zone containing between 1 per cent and 5 per cent disseminated sulphides.

Tunks also highlighted the fact that TIDD001 was drilled into a void at 79 metres depth prior to reaching the target zone which was anticipated between 100 metres and 150 metres down hole. Consequently, AOU now intends to redrill from another location once permits have been granted. In the interim the drill rig has been moved on to hole TIDD004”.

The locations of the four holes being drilled can be seen below. 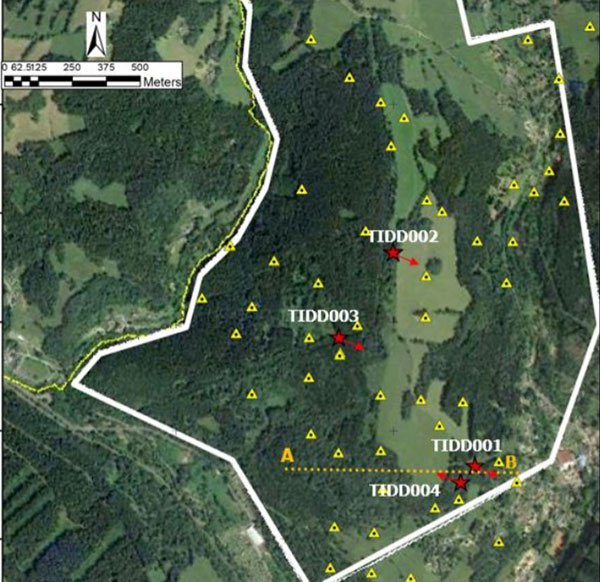 Examining TIDD001 in more detail, multiple zones of disseminated to semi-massive sulphide were intersected high up in the hole, above the anticipated target zone. Geological logging of the drill core has idenitified cobalt mineralisation in several massive sulphide veins intersected between 34 metres and 38 metres.

It should be noted here that AOU is in its early stages and investors should seek professional financial advice if considering this stock for their portfolio.

An unmapped underground void from the historic Tisová mine was intersected, resulting in lost water return. Attempts were made to case the hole and continue with smaller diameter core but these were unsuccessful.

Having abandoned the hole at 79.3 metres, well short of target depth for the sulphide halo between 100 metres and 150 metres down hole, a new collar position will be planned for TIDD001 and the hole will be re-drilled as TIDD001A upon completion of TIDD004.

AOU will complete its four-hole drilling program with TIDD004, 400 metres south-east of TIDD003 which intersected visible cobalt and copper mineralisation. The hole is designed to drill to 350 metres, targeting a significant sulphide halo from 200 metres.