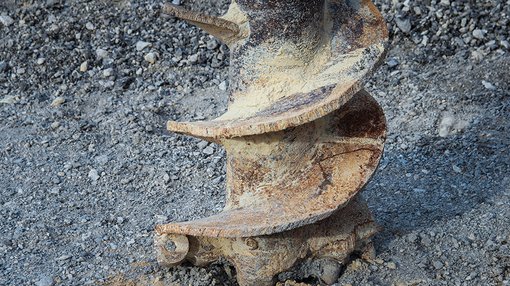 Auroch Minerals (ASX:AOU) is currently undertaking drilling of its third drill hole at a depth of 689 metres at its copper-zinc Alcoutim project in Eastern Portugal.

Crucially, the hole is now in the VSC (volcanic sedimentary complex) target sequence and has intersected sulphide-rich horizons with strong deformation, similar to the documented geological characteristics of Neves Corvo and other major VMS (volcanic massive sulphide) deposits within the Iberian Pyrite Belt (IBP).

The IBP is one of the world’s most significant mining districts, and is renowned for its poly-metallic (copper and zinc dominant) VMS deposits. It’s home to over 80 known deposits and resources totalling more than 1,700 million tons of mineralised ore.

The region has also been branded the Land of the Giants by AOU CEO Dr. Andrew Tunks, hosting three super-giant (Rio Tinto, Neves Corvo and Aljustrel) and ten giant deposits.

Although AOU is in its early stages of development and investors should seek professional financial advice if considering this stock for their portfolio.

The geology intersected in from ALFP003 strongly indicates the prospectivity of the current target. There is a significant correlation with the previous results from Billiton’s historic AC-1 hole, which is precisely what the company has been aiming for here.

Hole 3 is collared close to the historic Billiton (1986) AC-1 hole, which was abandoned at 1,063 metres in sulphide-rich black shales due to rig limitations, interpreted to be the strike extension of the host rock to mineralisation at Neves Corvo, which Auroch is targeting.

AOU expects to complete Hole 3 next week, with progress slightly delayed due to the Portuguese summer holiday. Full results from this promising drill hole will be reported shortly thereafter.