Lithium exploration group Auroch Minerals (ASX:AOU) has strengthened its position in the Erongo Region of Namibia, one of the most prolific sources of lithium production in the country.

Before we go too far, it should be noted that this project is located in a region which carries sovereign risk. As an early stage initiative operating in a high risk region where getting mining projects up and running is no simple feat, those considering this high risk stock as an investment should seek independent financial advice.

Through the negotiation of an option and joint-venture agreement over EPL 5751 the company has continued the growth of its Karibib Lithium Project, complementing and building upon the five EPL applications that were announced on November 14, 2016.

Highlighting the significance of this development, AOU Chief Executive, Doctor Andrew Tunks said, “Importantly, our reconnaissance work has already identified extensive pegmatites within the tenement and our goal is to rapidly identify and test large lithium bearing pegmatites of similar age and style to the pegmatites that host the nearby Rubikon and Helikon historical lithium mines”.

The proximity of Karibib to these high yielding lithium regions is shown below. 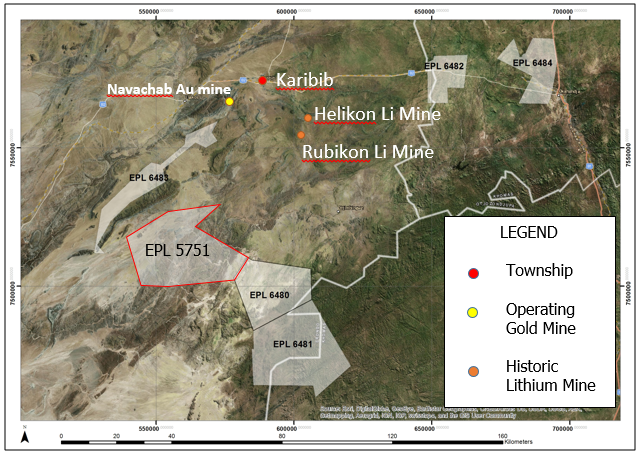 Initial inspection by the Company of EPL 5751 confirmed the existence of pegmatites outcropping at surface, with the largest observed to-date exceeding 300m in length. A rock chip sample (B2674) was collected from this pegmatite and assayed 2.73% Li2O.

However, investors should be aware that AOU is a speculative early stage company with proven revenue streams yet to be established. Consequently, those considering this stock should seek independent financial advice investing in this stock.

Lithium mineralisation evident in most pegmatites

Management highlighted that lithium mineralisation was noted in most pegmatites visited and this has been supported by first-pass rock chip sampling that returned an impressive single significant lithium dioxide grade of 2.7%.

The following is a list of results from samples taken from EPL 5751 which have confirmed the existence of pegmatites outcropping at surface, with the largest observed to date exceeding 300 metres in length.

Management intends to conduct an exploration program that will locate all pegmatites within the license. On this note, Tunks said, “This will be followed by nonintrusive rock chip sampling and broad-based sampling to examine the geochemistry of the pegmatites”.

These developments could place the company in a strong financial position to fund its exploration initiatives with $8.4 million in cash ($6.4 million) and receivables.

Tunks confirmed that the work will commence in mid-January 2017, which should result in relatively near-term news flow regarding exploration results, a potential share price catalyst.

The company’s shares have already performed well over the last 12 months and this week’s intraday high of 18 cents is close to the three-year high of 19 cents, suggesting that a move beyond this level could interest technical analysts.