Auroch Minerals’ (ASX:AOU) Chief Executive, Dr Andrew Tunks has expressed a reasonable degree of confidence after the company completed its first two holes of the drilling program at the Tisova cobalt-copper-gold project located in the Czech Republic.

One hole intersected multiple zones of massive to semi-massive sulphide mineralisation with a disseminated sulphide halo over 100 metres thick between 333 metres and 462 metres including visible cobaltite.

The other intersected multiple lenses of vein and disseminated sulphides between 370 metres and 400 metres. Assay samples are being prepared for analysis as the company commences drilling the third hole which is expected to be completed by mid-November.

AOU currently holds an option to acquire 100 per cent of the project which it can exercise at any stage during the nine month period between July 2017 and April 2018. With recent sampling by the company having confirmed the presence of cobalt, the current drilling program is highly important.

The target zones are highlighted below and in referring to the company’s progress to date, Tunks said, “This is a pleasing result from the first two holes of our drilling program which has utilised our 3D model to target the thickest part of the sulphide rich orebody.”

Current results are encouraging for AOU, as there are similarities between its Tisova project and European Cobalt (ASX:EUC)’s Slovakian projects. EUC is capped at $135 million compared to AOU’s $16 million and given the early stage of AOU’s progress there could be a strong upside for the Czech-based explorer.

However, as stated this is an early stage play for AOU and investors should seek professional financial advice if considering this stock for their portfolio.

Tunks said he was confident that hole TIDD03 would intersect multiple sulphide zones as illustrated in the cross-section view. 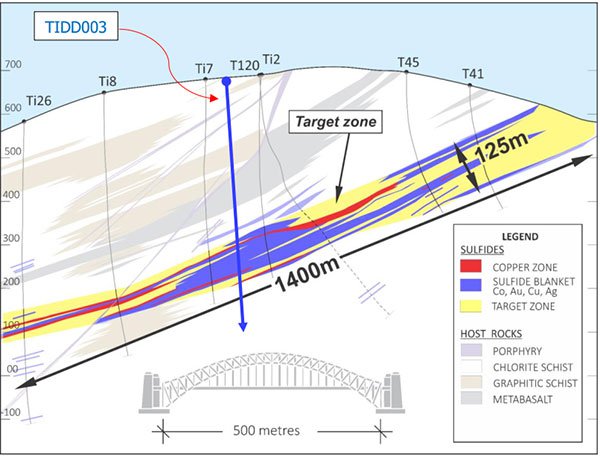 Other geological features now tend to suggest that the mineralisation has a strong structural control which had not previously been recognised. Importantly, the new model opens significant exploration potential.