Auroch Minerals (ASX:AOU) has announced a new Joint Venture to earn up to 75% of the Alcoutim Project, a significant Cu-Zn-Pb-Au-Ag opportunity in south-eastern Portugal located immediately along strike from the high profile Neves Corvo Mine in the western half of the world famous Iberian Pyrite Belt (IPB).

The IPB is one of the largest and most significant mining districts in the world, renowned for its polymetallic (copper-zinc dominant) Volcanic Massive Sulphide (VMS) deposits with over 80 known deposits and resources totalling in excess of 1.7 billion tons. Amazingly the Rio Tinto deposit has been mined since circa 1200BC and the world’s second largest mining company was founded in Britain in 1873 to mine copper at the Rio Tinto, deposit near Huelva in southern Spain.

Although, it should be noted that AOU is an early stage play and those considering this stock for their portfolio should seek professional financial advice.

The following map highlights the close proximity of the Alcoutim Project to others substantial deposits situated along an already established and understood geological trend. 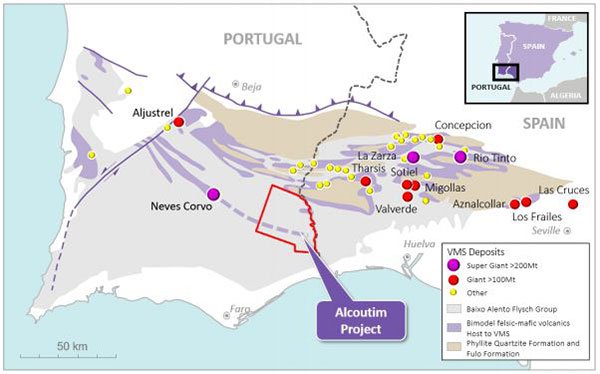 The Alcoutim Project is immediately along strike and down plunge from Lundin Mining’s Neves Corvo deposit which based on the Lundin Mining 2016 Resources and Reserves report is rich in copper and zinc.

The Neves Corvo mine’s copper zones are estimated to be 90,551 million tonnes grading 2.5% copper, 1.1% zinc, and 116 million ounces of silver grading 43 grams per tonne based on resource statements released by the operator Lundin mining.

Exploration has continued at Neves Corvo since the initial discovery in 1977 and even recently new orbodies are being discovered within this amazing deposit. Semblana a copper rich zone was discovered in 2010 with intercepts such as;

Given the Alcoutim tenements lie directly along strike and down plunge of the Super-Giant Neves Corvo mine, and multiple coincident magnetic-gravity and electromagnetic anomalies have been identified, AOU intends to immediately conduct diamond drilling to test these targets.

From a broader perspective, Portugal is a mining friendly jurisdiction with first-class infrastructure, transparent mining laws and judicial security.