Artemis ready to embark on drilling campaign at Carlow Castle 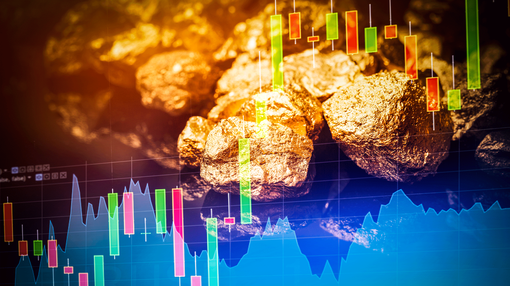 Shares in diversified metals explorer, Artemis Resources (ASX:ARV), a company that is being increasingly viewed as a prospective cobalt play surged 35% last week, and based on management’s commentary on Monday it would appear there is the possibility of more upside.

Of course, it should be noted that share trading patterns should not be used as the basis for an investment as they may not be replicated. Those considering this early stage stock should seek independent financial advice.

Impressive assay results have been returned from a sampling program covering an area of approximately 3.5 square kilometres, only a relatively small section of the 32 square kilometre Carlow Castle project.

Management noted on Monday when advising that a fast -tracked 3000 metre drilling program would start at the end of the week, that high-grade cobalt grades up to 1.12% had been returned from surface sampling.

There were also impressive gold and copper grades of 35.3 grams per tonne and 3.21% respectively returned from the Quod Est area.

In relation to these developments, ARV chairman, David Lenigas said, “This recent surface sampling program around the many old shafts covering an area of about 3.5 square kilometres returned grades of up to 1.12% cobalt, 8.2% copper and 35.3 grams per tonne gold, while clearly showing the cobalt potential in the area”.

He also highlighted that the Carlow Castle resource remains open in all directions. Another factor working in ARV’s favour is the fact that the Radio Hill sulphide processing facility is only 20 kilometres from the mine site and is accessible by public roads. 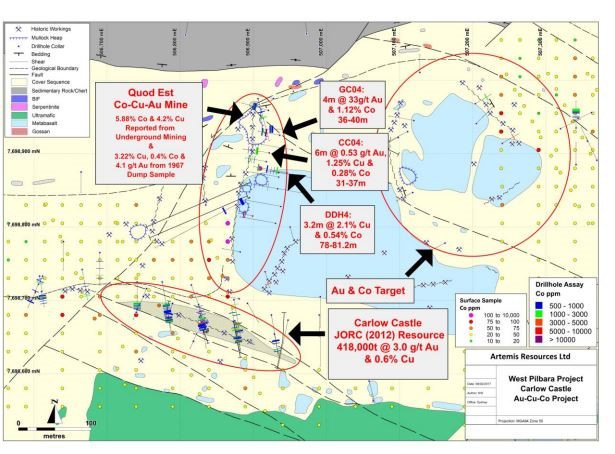 The Carlow Castle Project is located only 10km South east of Roebourne in the Pilbara Region of Western Australia and the tenor of mineralisation and large 32 km2 100% owned tenement makes the Project a valuable asset for Artemis who also owns the surrounding tenements.

Also working in Artemis’ favour is the minimal exploration conducted at Carlow Castle as companies focused on the gold and/or copper mineralisation as single commodities.

The review by Artemis shows that an integrated approach to mineralisation and an expansion of exploration is required to better define the Project, with work to date highlighting a potentially material asset that has remained under explored.

Shares up more than 100% in a fortnight

At this point management released information on mineralisation that was gleaned from past exploration results and its own shallow drilling which yielded grades in excess of 1% cobalt and assays of 5.88% at the Quod Est mine.

As Finfeed.com noted at the time, cobalt had not been factored into the initial resource estimate of 418,000 tonnes grading 3 grams per tonne gold and 0.6% copper.

Friday’s share price close of 11.5 cents implies a gain of more than 100% in the space of two weeks.

Again, past performance is no indication of future performance and share trading patterns should not be used as the basis for an investment as they may or may not be replicated. Those considering this stock should seek independent financial advice.

At that stage management flagged its intention to fast track the imminent extensive drilling campaign with a view to gaining a better understanding of mineralisation and expanding the resource, this time taking into account the substantial impact of cobalt mineralisation, a mineral that is currently fetching close to US$50,000 per tonne.

Some analysts believe that the supply demand dynamics for cobalt in the coming 12 months may see it replace lithium as the market darling metal, particularly given it is also used in the manufacture of new age batteries.