It was just over a week ago that shares in Ardiden (ASX:ADV) surged 25% in response to news regarding successful drilling results at its Seymour Lake lithium project in Ontario.

As highlighted by Finfeed at the time there was reason for further optimism given it was, and still is, relatively early in the drilling campaign and mineralisation at the 7000 hectare prospect remained open to the North and West.

The promising news continued with ADV announcing on Wednesday afternoon that numerous shallow spodumene bearing pegmatites had been logged in drill core from a further three diamond drill holes with mineralised zones up to 18 metres in width.

This drilling has extended the pegmatite zones further north at the North Aubry prospect where mineralisation remains open to the east, west and at depth. 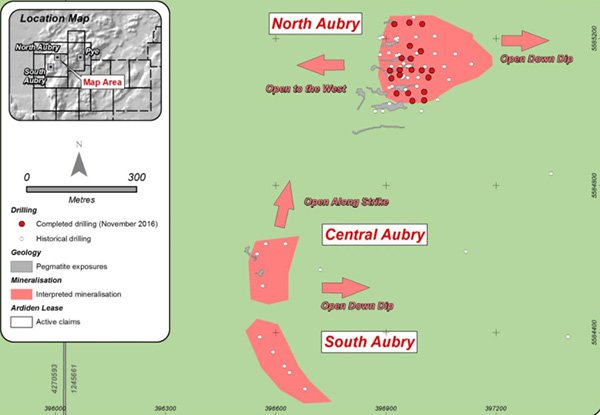 Management has decided to extend the drill program by 500 metres to the south to test the Central Aubry prospect. If the initial phase of drilling in this region is successful the prospect will be included in the second phase resource delineation drilling program next year.

Importantly, these drilling results will underpinned a maiden JORC 2012 mineral resource which management expects to declare in the second quarter of 2017.

Immediately after the release of today’s news the company’s shares pushed up from 2.7 cents to 2.8 cents with volumes of more than 1.6 million shares traded in a matter of minutes.

Since last week’s spike the company has traded in a tight range between 2.6 cents and 2.8 cents, but further positive results could see its shares push up towards the 3.2 cent mark that it traded at in mid-October after rallying 100% in a month.

However, historical trading patterns should not be viewed as an indication of future share price performance. ADV is an early stage exploration company and those considering an investment in this stock should seek independent financial advice.