Ardiden (ASX: ADV) announced on Monday morning that it had achieved early success in its drilling campaign at the Seymour Lake lithium project in Ontario. The group commenced a 2000 metre drilling campaign in October with a view to establishing a maiden JORC 2012 mineral resource.

This is a potentially market moving event which is expected to occur in the second quarter of 2017. Today’s results demonstrate that Seymour Lake has the potential to be the source of a significant resource with numerous shallow spodumene bearing pegmatites logged in drilling core from 15 completed diamond drill holes with mineralised zones up to 22.5 metres wide.

This news has sparked substantial interest in the stock with its shares increasing from Friday’s close of 2.4 cents to a high of 3.0 cents in morning trading, representing an increase of 25%.

Adding further optimism is the fact that mineralisation at the prospect remains open to the North and West. With 198 drill core samples now pending analysis there is the prospect of further positive news flow in coming weeks.

Adding further flavour to the story is the fact that new claims at Seymour Lake which host multiple pegmatite exposures have been approved by the Ontario Ministry of Northern Development and Mines (MNDM).

The project now covers a total area of more than 7000 hectares and the pegmatite exposures have been extended over a 5 kilometre strike length to the South. The new claims will allow ADV to progress future mapping and exploration programs.

Remember, however, that ADV is in its early stages of exploration and investors should therefore seek professional financial advice if considering this stock for their portfolio.

These lie to the east side of the project where there is also the possibility of discovering base metals. Historically, copper mineralisation was identified within the southern portion of the new claim area.

The following shows the Seymour Lake project including new pegmatite exposures, faults and dykes and the newly staked claim areas. 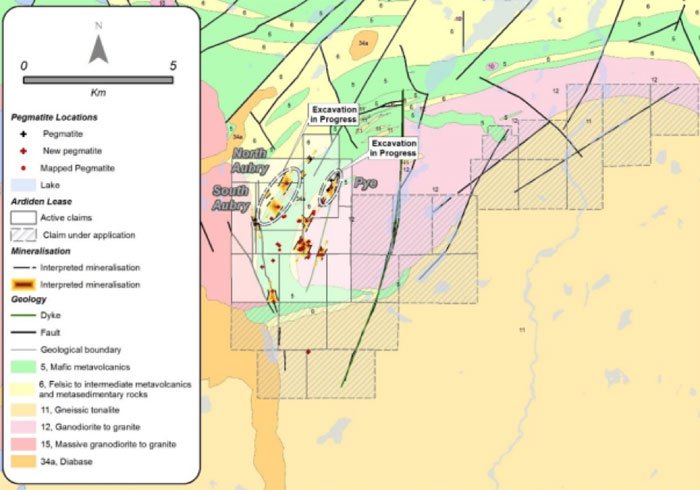