Lithium/graphite explorer, Ardiden (ASX:ADV) has advised the market that its drilling program at the Manitouwadge graphite project located in Ontario, Canada has been completed and assay results are imminent.

Given positive visual results from the last 19 drill holes in the 30 hold drill program indicated that the holes continued to intersect multiple layers of large flake graphitic mineralisation over various widths, the assay results are keenly anticipated.

On this note management said, “Visual logging and inspections of the diamond drill core by Ardiden’s geological team have identified multiple layers of thick graphitic mineralisation in zones up to 65.4 metres in true width”.

Importantly, the mineralisation intersected in the current diamond drilling program has verified the interpreted extensions of the graphitic mineralisation zones for a strike extension of over 700 metres as highlighted below.

Second phase drilling at Seymour Lake about to commence

There has been some strong news flow from ADV with the completion of first phase drilling at the Seymour Lake lithium project, also located in Ontario, confirming the presence of high grade lithium mineralisation at surface and at depth at the North Aubry prospect. Assay results from the Central Aubry prospect also confirmed high-quality spodumene mineralisation.

ADV is looking to expand the initial maiden lithium resource potential at North Aubry to ensure there will be sufficient resources to be economically viable for any potential future mining operations.

It should be noted here that Ardiden is an early stage play and investors considering this stock for their portfolio should seek professional financial advice.

Geological interpretation from first phase drilling indicates that mineralisation at the North Aubry prospect appears to be plunging to the north-west, which could be indicating a possible deep pegmatite feeder zone along the western controlling structure as illustrated below. 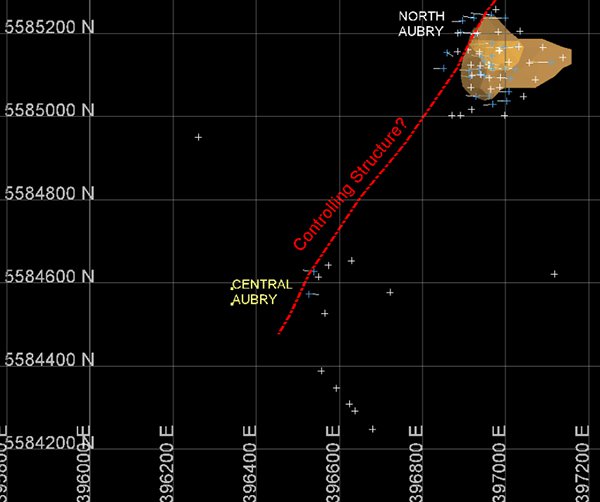 Management said preparations are almost complete to commence Phase 2 of the diamond drilling program at Seymour Lake, which will be designed to further test the extensions of the lithium mineralisation zones on the western and northern aspects of the North Aubry prospect, as well as drill testing the possible pegmatite feeder zone on the western flank.

One of the key focuses in terms of analysing data will be testing the concept of possible dilation along the feeder zone, which may strike south towards the central Aubry prospect, which could explain some of the similarities between the two prospect areas.

Highlighting the significance of such a development, management said, “If this geological interpretation is found to be accurate it could dramatically expand the potential size of the lithium mineralisation zones and therefore increase the scale of the lithium deposit.”