In an encouraging earlier than anticipated development that has caught the market’s attention, emerging lithium and graphite play, Ardiden (ASX: ADV) has quickly intersected spodumene bearing pegmatites structures at the initial stages of its drilling program at the company’s Seymour Lake lithium project located in Ontario, Canada.

The company’s shares have traded strongly throughout the day, having hit a high of 2.9 cents, up 7.4% on the previous day’s close of 2.7 cents. This comes on the back of strong gains already experienced in the last month as its shares doubled from 1.6 cents to 3.2 cents.

The recent retracement could represent a useful entry point as the company pushes up towards its 12 month high of 5.3 cents.

However, investors should not use historical share price performances as the basis for an investment decision alone. Furthermore, ADV is an early stage exploration company, and should be considered a speculative investment, warranting independent financial advice.

Further share price upside could be driven by the release of a maiden JORC 2012 Mineral Resource which management is targeting for the second quarter of 2017. Results from the current drilling program will underpin the maiden resource, highlighting the importance of today’s news.

The diamond drilling campaign is designed to target the immediate project area around the North Aubry prospect, located within an extensive 5 kilometre long pegmatite zone, identified during a recent mapping and sampling campaign. 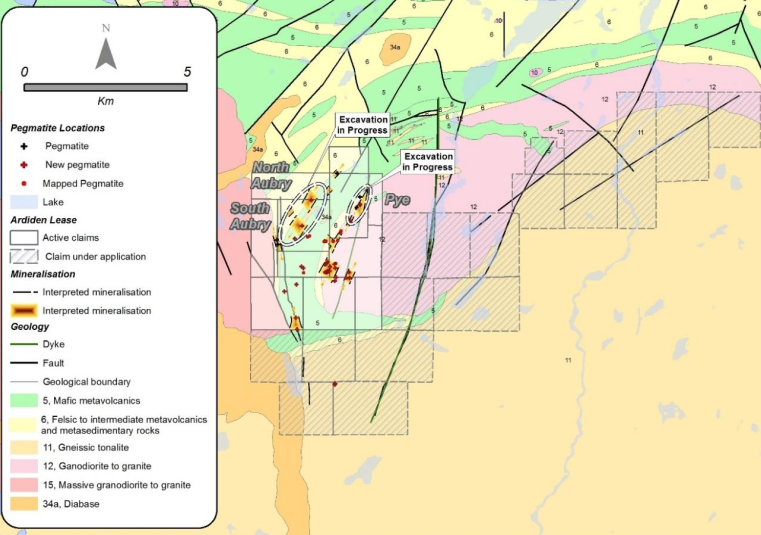 The project presents as one which could be a low-cost proposition given that the pegmatites structures are located at or near surface, providing relatively accessible targets for resource delineation.

The area in general is considered highly prospective for spodumene mineralisation, evidenced by the 34 mining claims (11 granted and 23 pending) across an area covering approximately 7000 hectares.

ADV’s other lithium asset is also located in Ontario. The Root Lake lithium project comprises approximately 1000 hectares of mining claims and has over 10,000 metres of historic drilling. This region also features spodumene bearing pegmatites structures with widths in the vicinity of 20 metres, but the grades are substantially higher at circa 5% lithium dioxide.