As predicted in the 3D model for the project, all four holes intersected multiple zones of sulphide mineralisation contained within a larger disseminated sulphide blanket.

In addition, visible cobalt minerals were intersected at two of the holes, which were drilled within thicker haloes containing 1-5 per cent vein and disseminated sulphides.

At the site, geological logging has identified multiple sulphide zones including pyrrhotite, pyrite, chalcopyrite and galena between 40.1 – 42.2m, 69.1 – 75.9m and 161.6 – 174.5m. Typically, these types of sulphides form in narrow bands up to 40cm wide within a broader sulphide ‘halo’.

All samples from the drilling campaign have been sent to the ALS laboratory in Romania, with full results expected to be released in December.

In commenting on the developments at Tisová, CEO Dr Andrew Tunks said: “We have now completed our initial drilling program at Tisová and eagerly await the results from the assay laboratory. The drilling has revealed multiple narrow zones of massive to semi massive sulphides within a broader sulphide halo as was expected from the previous work.

“Unfortunately, the weather onsite has closed in and we are unable to redrill the third hole which was abandoned in a mining void. However, we now have ample sample material to test for the presence of economic grades and thicknesses of cobalt, gold and copper within the Tisová mineral system.”

It should be noted here that AOU is still an early stage play and investors should seek professional financial advice if considering this stock for their portfolio.

The image below shows the geological section highlighting sulphide halo and historic drilling at TIDD001 and 004. 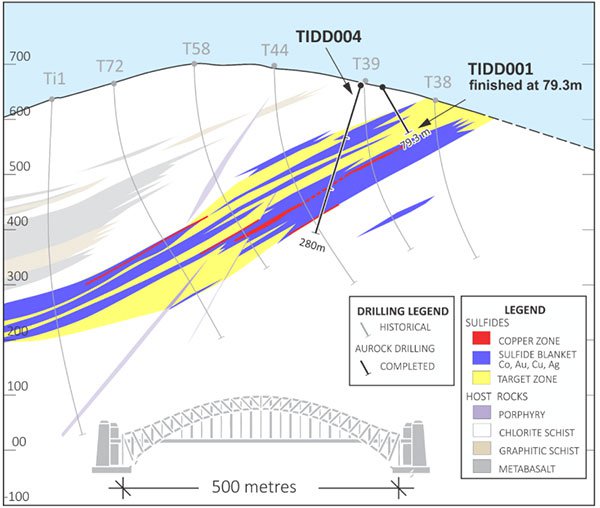 The background sulphide zones are not based on the recent drilling programmes, but on historic work. However the zones correlate broadly with what has been discovered by AOU in its recent drilling campaigns. New sections reflecting the updated geology will be published when the assay results are returned in December.

Today’s news follows last week’s announcement that the company had received A$1.1 million in cash following the sale of its Manica Gold Project to Xtract Resources. AOU’s other ongoing exploration activities include its Alcoutim project in Portugal and its Karibib Project in Nimibia.