Koppar Resources Ltd. (ASX:VUL) (Vulcan Energy Resources) today announced that it has commenced a Scoping Study at its Vulcan Lithium Project in the Upper Rhine Valley of Germany, where it is targeting zero carbon lithium production.

The company has plans of becoming the world’s first producer of zero carbon lithium. It aims to achieve this by utilising dual-purpose geothermal energy and lithium-production wells.

The Vulcan Lithium Project will produce battery-grade lithium hydroxide from hot sub-surface geothermal brines pumped from wells, plus a renewable energy by-product that produces more renewable energy than it consumes during lithium processing.

This will effectively render the Vulcan Lithium Project the first zero-carbon lithium project in the world, without the need for environmentally harmful hard-rock mining.

The Vulcan Lithium Project is strategically located within a region well-serviced by local industrial activity, at the heart of the European auto and lithium-ion battery manufacturing industry — just 60km from Stuttgart. This is significant, as the burgeoning European battery manufacturing industry is forecast to be the world’s second largest, with currently zero domestic supply of battery grade lithium products. 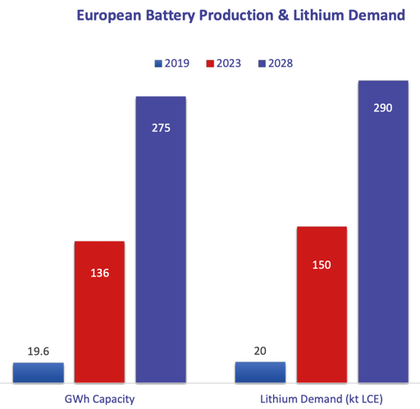 Engineering and consulting company Hatch Ltd. has been engaged to provide engineering services on the Scoping Study.

Hatch brings together global industry leading lithium and geothermal power expertise from over 9,000 staff in 70+ offices. It has unique experience at designing these types of geothermal and lithium integrated plants having working on similar in Salton Sea, California, which is the only other known geothermal field in the world with similar lithium grades and flow rate.

The Scoping Study for the project includes the design of an integrated geothermal and lithium extraction plant.

Assuming this Exploration Target is converted into an Inferred Resource, this project would be the largest lithium resource in Europe.

While geothermal brines are relatively common throughout the world, the fluids are rarely lithium rich. Typical geothermal brine fields have lithium values in the order of 1-10mg/l Li.

However, the Upper Rhine Valley geothermal brine field exhibits lithium values one to two orders of magnitude greater: up to 210 mg/l Li, and often over 150 mg/l Li from geothermal fluids sampled over extended periods of time from multiple locations.

These concentrations are similar to the Salton Sea brines in California which are being developed by a number of companies to produce power and lithium. 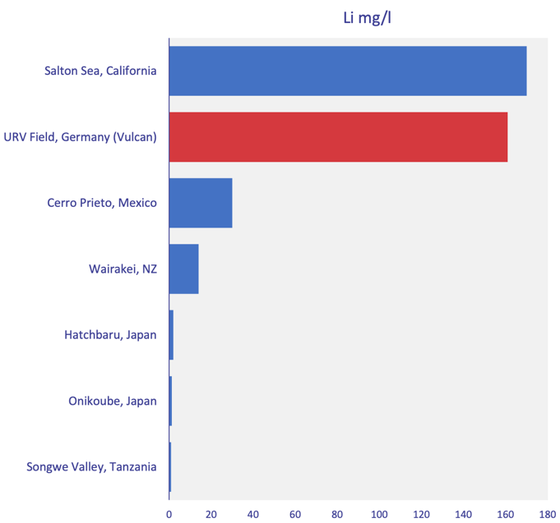 The Vulcan Lithium Project includes a commanding land position in the brine field of over 78,600 ha of exploration licenses, of which over 51,000 ha is already granted.

The overall brine field is well understood due to historical petroleum exploration, with considerable amounts of existing seismic and drilling data potentially available for purchase, exploration and resource evaluation.

The aim will be to explore and develop the Vulcan Project to produce battery-grade lithium hydroxide from geothermal brines.

Subject to confirmation in proposed study work, a Direct Lithium Extraction (DLE) process will be used for lithium processing. This is quicker and less water and carbon-intensive relative to the evaporative method used in South American salars with the temperature of the brines anticipated to be an advantage in processing.

As a by-product of the production process, renewable geothermal energy could be generated from dual-purpose wells that fully offsets energy consumed in lithium production and processing, providing a premium, “Zero Carbon Lithium” product for the EV market.

The company plans to rapidly advance the Vulcan Lithium Project to a completed Scoping Study over the next 12 months. Work programs will commence with acquisition of all available seismic and geochemical data from the region, as well as a confirmatory geochemical sampling programme from available well locations, to confirm lithium grades, and engineering studies surrounding a combined geothermal and Direct Lithium Extraction (DLE) plant.