Accelerate Resources (ASX:AX8) has completed a fixed loop electromagnetic (FLEM) survey, as well as soil sampling and geological mapping, at the Young Henry prospect at its Mount Read Cobalt Project in Tasmania.

Confirmation of a ground EM conductor associated with nickel-cobalt soil anomalism and mapped gossans is highly encouraging, and confirms the Young Henry prospect as a priority exploration target. 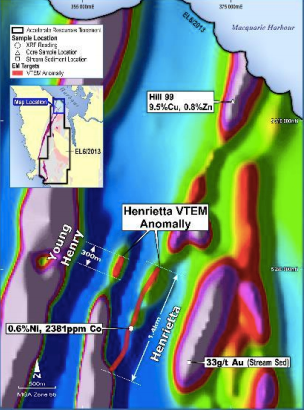 A south-southwest plunging moderately conductive bedrock conductor was identified, which has the potential to indicate an accumulation of sulphides. Soil sampling on the Young Henry Grid confirmed anomalous nickel, cobalt, copper and zinc soils and a gossan up plunge from a modelled FLEM conductor.

Gossanous soil samples were favorably located up dip and up-plunge from the modelled FLEM conductor at three locations. The strongest gossan was located at the up-plunge projection of the conductive body in the northeast of the Young Henry grid.

Drilling is scheduled to test the FLEM conductor and the nickel, cobalt and zinc zone in late August. Thomas Creek TCD002 and TCD003 drilling results are also due back in the coming weeks.