Accelerate Resources (ASX:AX8) has discovered a large, copper-cobalt porphyry system at the Thomas Creek prospect, which sits within the Tasmanian Mt Read Project.

This discovery is based on data from the recent Thomas Creek diamond drilling program, including analysis and interpretation of geology, geochemistry and geophysical data sets.

A range of encouraging observations suggest that AX8 has all the right components in place:

Encouragingly, porphyry style mineralisation systems generate some of the largest ore deposits in the world. Generally, these are at least 1,000Mt and have long mine-lives, containing upwards of 1 Mt copper with by-products of gold, silver and/or molybdenum.

All porphyry style mineralisation systems have large alteration zones which generate significant accumulations of magnetite. These can be measured by magnetic surveys. Thomas Creek’s aeromagnetic footprint is ~13 square kilometres. 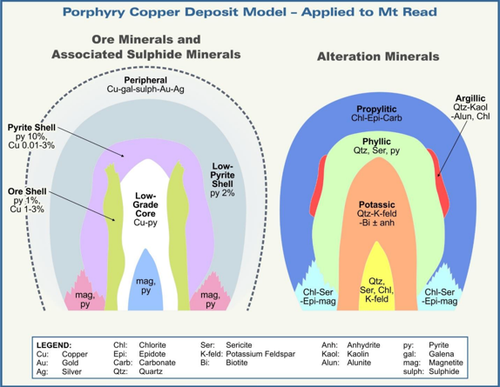 Results received from diamond drill hole TCDD003 confirms the presence of broad zones of disseminated cobalt-pyrite mineralisation associated with higher grade cores, including 32m at 0.04% cobalt from 280m in TCDD003, which includes 8m at 0.11% cobalt from 299m, associated with semi-massive and stringer pyrite veining, located below a surface sampling location which was sampled in 2017.

Similar cobalt-pyrite mineralisation was intersected in hole TCDD001, which included 3m at 0.23% cobalt from 150m in a semi-massive pyrite vein, within a zone of coarsely disseminated pyrite.

The anomalous copper in TCDD002, 46m at 0.11% copper from 114m, confirms the presence of copper inside the interpreted pyrite shell of the porphyry system. 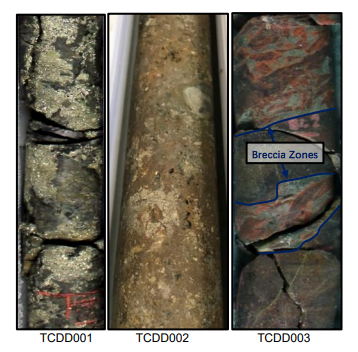 AX8 said that it is highly encouraged by these promising results. Ongoing detailed analysis and systematic programs of work will be instrumental in establishing economic zones of mineralisation within this large porphyry system.