2017 shaping up as a year of promising newsflow for Peninsula

South Korean focused mining exploration group, Peninsula Mines (ASX: PSM) informed the market on Monday morning that it has made progress in terms of identifying projects that can be fast tracked to the drill target definition stage.

With multi-commodity assets it will be interesting to see how PSM stages its exploration campaign as they cover graphite, lithium, zinc-silver and gold. Importantly, there is the potential to negotiate offtake agreements with end users in South Korea, facilitating an economical and relatively simple route to market. 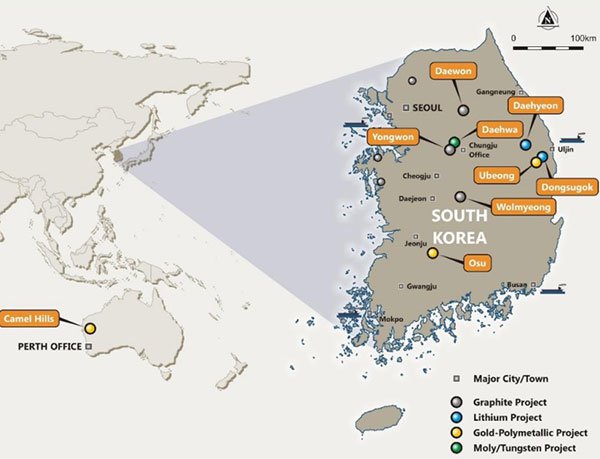 As indicated in comments made by Chief Executive, Jon Dugdale, 2017 is shaping up as an exciting year for the group as he said, “The company has generated multiple opportunities for discovery over a range of commodities, all with a very positive outlook and offtake potential in-country and it is now time to progress our key projects to the drill target definition stage and focus our efforts during 2017”.

The group has made progress on each of its four assets, but it is easier to look at these in isolation even though they are all situated in South Korea.

It should also be noted that PSM is an early stage exploration play and anything can happen. Investors should seek professional financial advice if considering this stock for their portfolio.

Channel sampling is underway at the Yongwon graphite project with a view to defining drilling targets once metallurgical results are optimised. In late October the company was granted a three-year exploration right over the Eumseong 32-1 tenement sub-block, a 68 hectare area encompassing all the known graphite mineralisation at the project.

The company has the option to extend the exploration period to 6 years subject to a supplementary application to the Ministry. The most significant news regarding this project is that an accelerated exploration campaign has led to the identification of jumbo-sized graphite flakes.

A 10 metre wide graphitic zone has been exposed and sampled with the objective of determining the width and grade of graphite mineralisation at surface.

Encouragingly, a detailed EM geophysical program has been completed along the identified strike length producing strongly conductive responses, effectively extending the zone of interest to more than 400 metres and demonstrating continuity at depth.

Importantly, the EM results indicates only shallow holes will be required for drilling purposes, limiting costs and delivering earlier results. 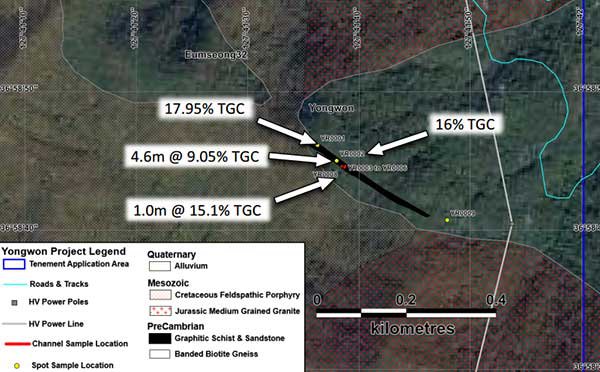 The end game for PSM is to optimise graphitic concentrate grades and generate a product that will be suitable for lithium-ion batteries and/or high-value expandable graphite applications.

With South Korea being the global leader in the manufacture of lithium ion battery technology this could be a crucial project in terms of generating cash flow to fund exploration and development across the group’s other assets.

Strongly anomalous lithium results identified through infill stream sediment sampling are believed to be associated with a corridor of pegmatites approximately 100 metres wide and continuing for a distance of up to 3 kilometres, associated with a northeast-southwest trending magnetic low evident in regional KIGAM magnetics.

PSM is now preparing to progress to ridge and spur soil sampling across the anomalous pegmatite trend with the objective of locating lithium (lepidolite/spodumene) bearing zones that may represent drilling targets.

Management is upbeat regarding the prospects of its Ubeong zinc silver project given the exceptionally high grades produced from previous rock chip and channel sampling in the Chilbo mine area which included zinc grades between 12.7% and 39.7%.

This has prompted the group to fast track exploration with an initial geophysical program including an EM trial over the Chilbo mine workings designed to detect massive sulphide bodies.

Dugdale highlighted that there are several potential outcomes that could occur from these initiatives including the location of further outcropping mineralisation that will assist approval and grant of tenement applications, as well as the defining of drill targets for new high grade zinc silver rich massive sulphide bodies.

Regarding the group’s Osu gold project, channel sampling has been completed across a 30 metre mineralised zone, results of which are being compiled. These will enable the company to develop a drilling program which is being fine-tuned to target the high grade veins/shoots within the upper 100 metres vertically below the channel sampled vein zones.

Dugdale highlighted that previous exploration had delineated individual veins within this zone with assays up to 0.14 metres grading 20.3 grams per tonne gold and 153 grams per tonne silver.

Drilling of up to 3 holes is being targeted for early December.

Looking across all of PSM’s assets, Dugdale said, “The ultimate objective is to progress key projects towards resource definition and ultimately development, possibly across multiple projects and commodities given the diversity offered by our portfolio”.