Will IPB be the next Carnarvon?

The years 2018 and 2019 have definitely featured contrasting conditions for IPB Petroleum (ASX:IPB) given that the company entered the fiscal 2018 facing the continuation of a pessimistic oil price outlook and constrained industry funding.

Foreign exchange rates were also working against our producers with the Australian dollar fetching more than US$0.80, well above recent levels.

Against this backdrop, management was able to not only maintain its valuable assets in the prolific Browse Basin, but complete valuable survey activity which has increased the technical merits of its assets, lowered possible commercial risks and increased the chances of farm-outs and/or financing at reasonable terms which you can read about in the current quarterly.

Importantly, the information gathered provided the foundation for a substantial increase to the prospective resource at Idris (WA-424-P), offshore north-west Australia in the Browse Basin.

These were all important developments given that industry funding for new exploration and appraisal opportunities is fundamental to IPB Petroleum’s strategy, in that the company relies on farm-outs and funding to undertake the more expensive permit work commitments such as drilling wells.

It is important to note though that IPB is in a position to generate income from oil sales from early stage exploration activity, a distinct advantage compared with its more speculative peers.

IPB entered 2019 as a much stronger company with a clear vision and a range of options.

In terms of those issues beyond management’s control, they couldn’t be better.

The recent rally in the Brent crude price saw it cruise past US$70 per barrel, while the Australian dollar declined significantly against the US dollar, a perfect scenario for IPB.

From an oil price perspective, the halcyon days were between 2011 and 2014 when the commodity mainly traded in a range between US$100 per barrel US$120 per barrel.

For the majority of that period, the AUD:USD exchange rate fluctuated between US$0.95 and US$1.10.

The mid-ranges of the commodity price and the foreign exchange rate equates to an Australian dollar oil price of $107 per barrel.

With the Australian dollar now hovering in the vicinity of US$0.70, and last Thursday slipping below that mark for the second time this year, it seems reasonable to apply that rate.

This equates to an Australian dollar oil price of $100 per barrel relative to a Brent crude price of US$70 per barrel.

Consequently, we may as well be back in the heady days of 2011-14 when pricing ASX-listed companies that will be selling oil in US dollars.

The following 12 month share price chart demonstrates the recovery that started as 2019 ticked over.

This has significance for oil companies involved in exploration as there is normally a flow on effect as value becomes more difficult to find in the larger companies.

Consequently, a company such as IPB Petroleum is perfectly positioned to benefit from investors looking to identify under the radar stocks.

Best address in a sought-after region

What is likely to bring IPB under the spotlight quicker than many other smaller players is the quality of its assets.

Exploration Permit WA-424-P is wholly owned and operated by IPB, and over the last six months the company has continued to progress its farm-out plans, with access to the company’s data room and seismic project provided to certain interested parties.

Management recently noted that ‘a small number of parties’ remain interested in the process.

IPB is positive about the potential of its permits and interest by industry participants who may wish to pursue a collaborative initiative.

However, management has decided to focus its near-term strategy on the self-determining drilling, logging and testing project (DLT project) at Idris and Gwydion.

As indicated below, Gwydion is flanked to the west by world-class gas fields (red) such as Icthys, and within those there are also oil fields (green). 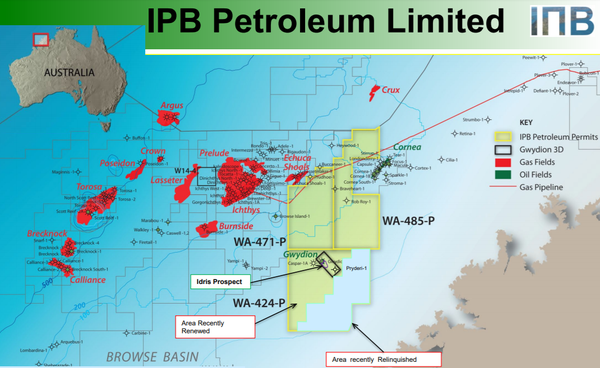 Carnarvon Petroleum (ASX:CVN) makes for an interesting point of comparison as its assets offshore Western Australia, stretch from north of the Browse Basin South to the Barrow Sub-Basin offshore Exmouth.

While the company had interests in a number of wells, it was the Dorado discovery that put it on the map, sending its share price from about 15 cents to more than 60 cents in July/August last year.

Dorado is one of the group’s more southerly situated assets in proven territory, similar to IPB.

During the December half, IPB successfully completed a feasibility study into its proposed DLT Project.

This involves the proposed drilling of a well at Idris followed by a flow test of a subsequent horizontal well over an extended period to assess the extent of the oil discovered by Gwydion-1.

The objective of the project is to help better define reservoir size and resources, which has been difficult to refine on the current 3D data set given the stratigraphic nature of the reservoir.

The oil produced during the flow test is to be transferred to a chartered tanker and subsequently sold.

The generation of income from oil sales is an important aspect to bear in mind for an emerging player such as IPB given that it will be used to repay proposed debt funding, with any surplus then distributed to IPB and possible vendor financiers.

IPB has already commenced debt financing activities and the environmental approval process, and as the company ticks these boxes there could be associated share price accretion.