What’s the upside for 88 Energy?

Hartleys analyst, Aiden Bradley has run the ruler across 88 Energy (ASX | AIM: 88E) as the company progresses with its drilling campaign which is expected to see it positioned to undertake production testing at the Icewine#2 oil reservoir located on the North Slope of Alaska in June/July.

While Bradley noted that one well does not prove a ‘Play’, he anticipates success would likely be sufficient to attract a major farm-in partner which would support the current valuation.

Despite recent weakness in the oil price, 88E has traded strongly in the last two months with its share price increasing more than 30% from 3.8 cents to an intraday high of 5 cents on Monday.

However, this is well shy of Bradley’s valuation of 7 cents, implying upside of 40% to yesterday’s high, and he has a speculative buy recommendation on the stock.

While acknowledging the benefits of success in the unconventional Icewine project, he believes the share price doesn’t capture the value of its 15 conventional leads and a potential resource of over 1 billion barrels net as outlined below under ‘conventional leads’.

It should be noted here that broker projections and price targets are only estimates and may not be met. Also, share trading patterns should not be used as the basis for an investment as they may or may not be replicated. Those considering this stock should seek independent financial advice. 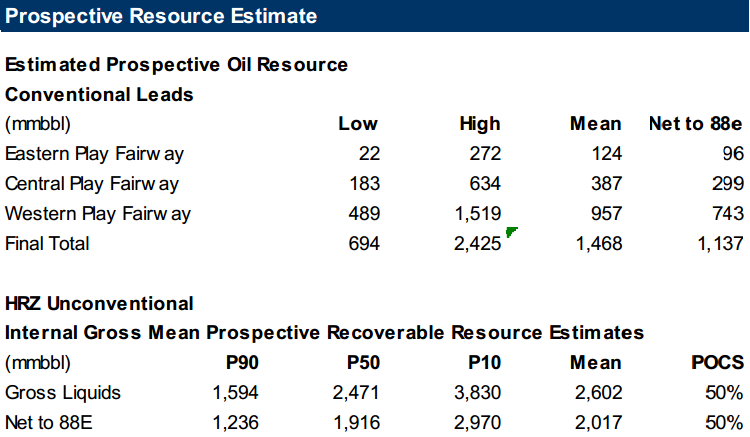