In a much anticipated event, Real Energy Corporation Limited (ASX: RLE), an Australian east coast focused gas company with interests in the Cooper and Surat Basins, will next Tuesday (June 23) provide an update on the 50/50 Joint Venture (Strata X Energy - 50%) Project Venus and the forward work plans for the remainder of calendar year 2020.

As well as outlining plans for Project Venus, both executives will be available for questions, and if you would like to gain an understanding of the venture, this is the link:

By way of background, the program is designed to initially produce gas out of Connor-1 and then prove sustained commercial gas flow rates with the goal of establishing resources and reserves.

Information already to hand includes an independent review of the data within and around the permit as mapped out below. 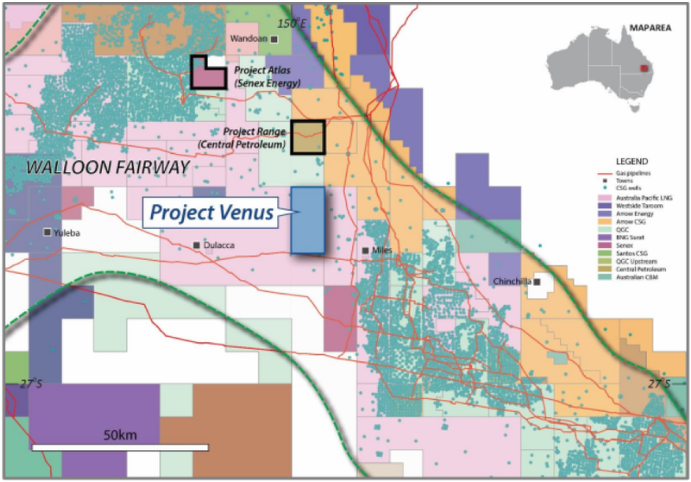 Real Energy is the administrative and commercial operator while Strata-X, at least for the initial phase to predictable reserves certification, will be the technical operator.

Aligning with Strata-X was an astute decision by Real Energy, as the experienced Prefontaine is the executive chairman of the group.

Gas production from Connor-1 could be share price catalyst

One of the historic wells in the permit, the Connor-1 well, was drilled immediately adjacent to the core hole, then cased and under-reamed (enlarged beyond the regional drilled size), but it wasn’t properly flow-tested.

However, Tuesday’s update will no doubt provide further details regarding this procedure.

It is anticipated that the pilot program will include long term flow-testing of the upper Walloon coals with the objective to prove commercial gas flows rates.

Once commercial gas flow rates are achieved in the pilot program, the Project Venus JV should be positioned to commence progressively converting the 658 BCF (694 PJ) Prospective Gas Resource to reserves, effectively fast-tracking development of the project, thereby offering the potential for early cash flows.