UIL Energy (ASX: UIL) announced on Wednesday morning that it had engaged Aztech Well Construction to prepare the Ocean Hill 2 well design which will be submitted to the Department of Mines and Petroleum for approval.

Management expects this will lay the platform for the well to be permitted and ready to start in late 2017. Aztech is an established player in the provision of project services in the Perth Basin where it has been contracted by high-profile players such as ASX listed AWE.

UIL’s goal is to develop two drill ready locations in 2017, and this is a material step in terms of meeting the milestones required to initially test and potentially bring its highly prospective assets into production.

UIL’s broader strategy is to focus on large-scale opportunities across known petroleum basins with a history of gas production in Western Australia. The group has intentionally targeted areas that have pipeline or transport infrastructure in place, and the Ocean Hill prospect meets this criteria.

With regard to the broader industry environment for oil and gas supply and demand in Western Australia, the following snapshot makes interesting reading. 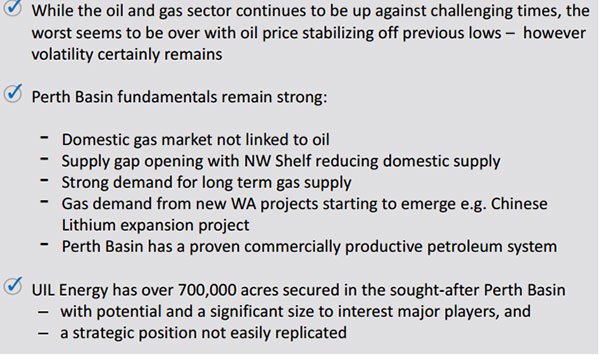 The potential promise of the Ocean Hill assets was highlighted by Managing Director John de Stefani in saying, “The earlier Ocean Hill 1 discovery well, initially identified a gas resource that has the potential to become significantly larger with further drilling and there are similar geological attributes to those seen in the Gingin gas field and Red Gully gas projects where Empire Oil and Gas commenced production in late 2013”.

Management confirmed today that it is continuing its efforts to acquire 3-D seismic survey data in relation to the Ocean Hill prospect.

However, it should be noted that UIL is an early stage exploration company and investors should not base investment decisions on forward looking statements or potential exploration results. Independent financial advice should be sought if considering an investment in this company. 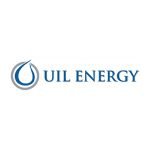