Sacgasco Limited (ASX:SGC) has released promising results from an Independent Prospective Resources Report of the Borba Prospect, located in the Sacramento Basin of California.

The chance of intersecting at least one gas zone has been estimated at a relatively high 70%.

The rig relocation is near completion, and the Borba 1-7 well is expected to spud this week.

Given the high chance of success and management’s extensive experience in this region, this is a much-anticipated project.

While the 70% chance of success determined by ERCE makes this a highly prospective target, management assesses the chance of development as 80%.

Given the group has vast experience in drilling wells and operating producing projects, the chance of development assessment adds significant validity to the independent resources report.

Providing even more investor interest is the macro environment with natural gas prices on the US West Coast having spiked considerably in recent months as indicated below. 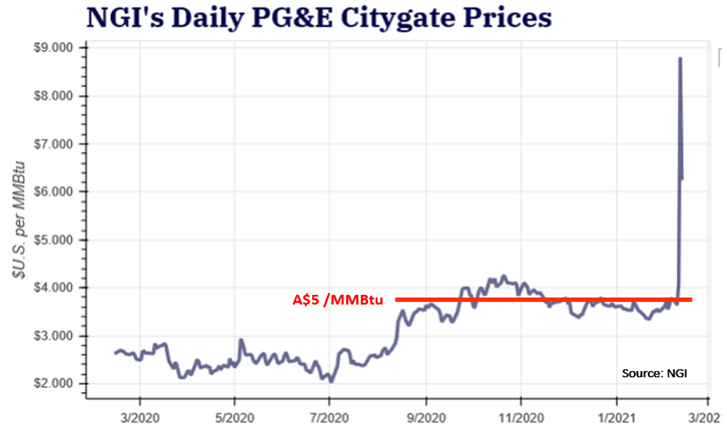 By way of background, the Borba Prospect lies just north of the Willows Gas Field (650 Bcf produced) on an extensive prospective Sandstone trend for Natural Gas in the North Eastern Sacramento Basin.

From a geological perspective, the potential traps mapped by Sacgasco along this trend range from Channel Sands wrapping around structural highs to stratigraphic traps created by sandstones onlapping onto structural highs.

The interpretation of the 3D data reveals traps that are significantly larger than the Borba Prospect with multi-Tcf-potential.

Success at Borba 1-7 is expected to open-up these plays for follow-up evaluation within the Borba AMI and within JV AMI on-trend with Borba.

However, if investors join the dots and look to the potential for success beyond the immediate drilling campaign Sacgasco’s share price could experience a sustained rally.

On the score of opening up future plays, Borba’s close proximity to the high profile Willows Gas Field as indicated below will come under the spotlight. 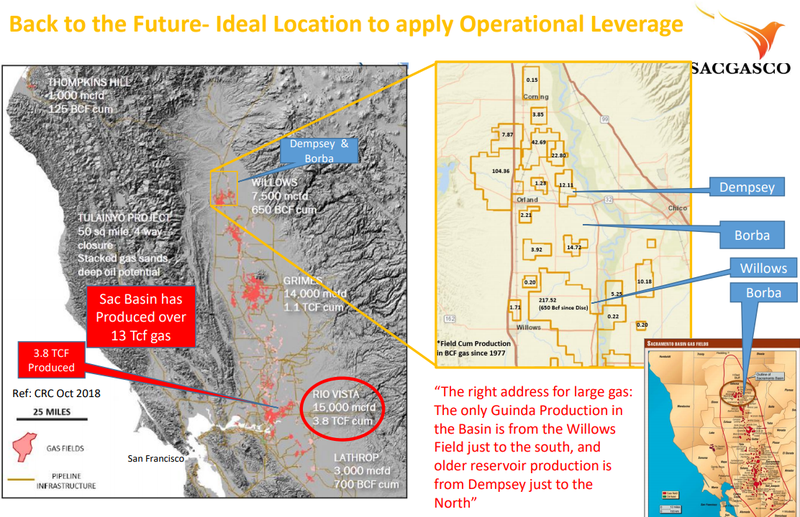 Well to test over 5000 feet of gas saturated sediments

In discussing the upcoming drilling campaign and drawing parallels with other major discoveries, Sacgasco’s managing director Gary Jeffery said, “Borba is a beautiful example of Discovery Thinking, and as we have stated, Borba is a play opening well to open-up a multi-TCF natural gas trend in the Northern Sacramento Basin.

‘’This well will test over 5000 feet of gas saturated sediments with 11 or more mapped reservoir intervals in one well, resulting in a high probability of success.

‘’It is worthwhile comparing the recent drilling at West Erregulla in the Perth Basin (the Little Brother of the Sacramento Basin) where a similar high COS of discovery and development of 69% was predicted ahead of the successful well results, high pressure, high-rate gas flows and market excitement, albeit from significantly deeper reservoirs while incurring higher costs and depending on a smaller gas market.

‘’It is also instructive to compare drilling Borba, onshore at a cost of less than A$6 million practically connected to a massive local gas market, to the recently drilled Ironbark well offshore the Northwest shelf, drilled for a single target in deep water at a cost of reportedly over $80 million.’’

The following ERCE table breaks down the multiple reservoir intervals to be tested, and this was used to establish an independent estimate of the unrisked gross prospective resource of 141.4 billion cubic feet. 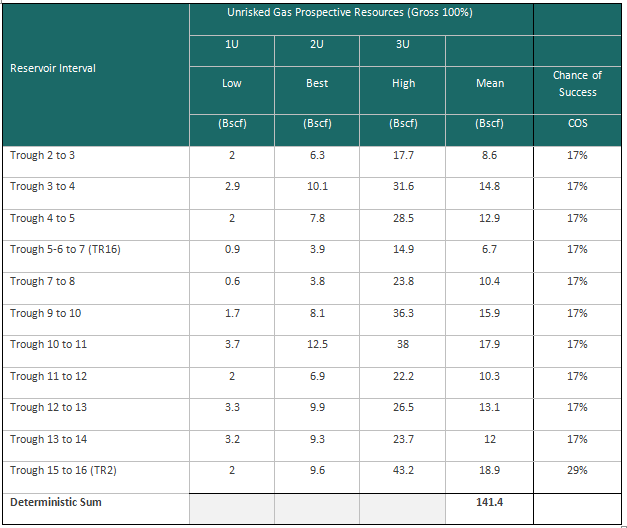 The Borba 1-7 well has been planned to test the presence of hydrocarbons in all 11 assessed layers.

Using the risking matrix in the table above, ERCE has aggregated, to a prospect level, volumetrics based on the risks and volumetric distributions of each reservoir layer.

To calculate this overall Chance of Success (COS), ERCE has made assumptions regarding the dependency of risk elements between each reservoir layer.

Management noted that the resulting volumetric distributions and risks were created by “Rolling Up” the risks and assuming success in at least one drilled interval.

The result determined the Success Case prospect COS of 70% as outlined below.

Management highlighted that an assessment of the Chance of Development was beyond the scope of the ERCE report and the capability of ERCE based on the information provided to them.

As experienced operators in the region, management assesses the Chance of Development to be 80%.

All prospective reservoirs in the Borba area of the northern Sacramento Basin produce high quality dry gas, so the hydrocarbon phase is expected to be commercially lucrative natural gas.