Sacgasco (ASX:SGC), an Australian based energy company focused on the exploration and production of conventional gas in the Sacramento Basin, onshore California has returned extremely promising results from the appraisal of wireline and mud logs from its Dempsey 1-15 Well.

The wireline and mud logs confirmed four zones of interpreted gas saturated sandstones at field production levels (depths from approximately 1,000 metres (3,300 feet) to 1,560 metres (5,100 feet). Based on log correlations and 3D seismic these gas filled sands have not been previously produced in this fault block of the field.

SGC estimates point to net gas pay ranging from 30 to 50 feet depending on petrophysical-parameter cut-off values used. However, as a guide the database on the Californian Regulator’s (DOGGR) website shows that SGC’s and other offset production wells have produced natural gas volumes that have exceeded 1 billion cubic feet of pipeline quality natural gas from individual equivalent zones.

On this basis, management appears well justified in making the comment that there is sufficient producible gas in the discovered zone at field production levels to provide cash flow to more than pay for the well.

Of further encouragement is that the result is consistent with the group’s pre-drilling prognosis, perhaps indicating that its expectations as it moves to the full depth of 3200 metres will be met.

Of course this is speculative at this stage and investors should seek professional financial advice if considering this stock for their portfolio.

While SGC’s Managing Director, Gary Jeffery was buoyed by the results, he also highlighted that this is only the first phase of the drilling of Dempsey 1-15, and pointed out that the focus now turns to drilling the more than five underlying targets.

The fact that the SGC meter station connection to natural gas markets is adjacent to the Dempsey Well means that the company can quickly move to commercialisation. 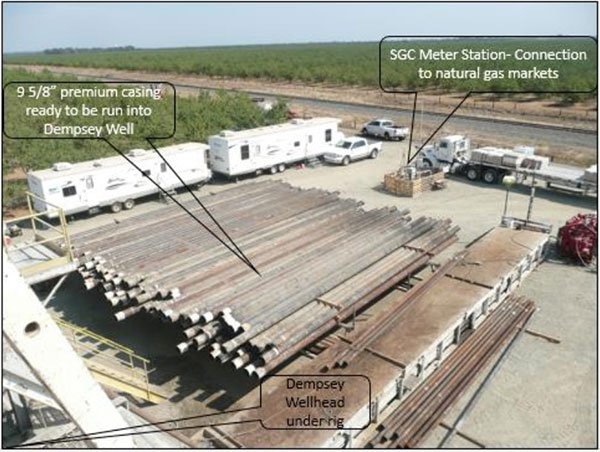 Importantly, SGC is already a producer, and the development of another producing asset is likely to be viewed favourably by investors who have warmed to the stock because of its more stable position as a cash flow generator rather than just an exploration play.

Management will be releasing further wireline logging results once the total drilling depth of 3200 metres is reached, a milestone that could be a significant share price catalyst should the news be as promising as today’s.