Sacgasco Limited (ASX:SGC) released its quarterly result for the three months to June 30, 2017 on Monday. It was an active three months for the company from a corporate and operational perspective, and promising newsflow provided positive momentum. However, the next quarter could see some game changing developments.

As a backdrop, SGC is an Australian-based energy company focused on natural gas exploration in the Sacramento Basin, onshore California. The company has an extensive portfolio of gas prospects at both exploration and appraisal stages, including multi-Tcf opportunities.

During the June quarter, and into July, SGC achieved a number of corporate and operational milestones, further strengthening its diversity and resilience, effectively consolidating its position as one of the leading Natural Gas operators in California’s world-class Sacramento Basin.

However, even though the company’s share price has increased substantially since June, it doesn’t appear to factor in the significant potential upside from drilling which has just commenced at its 50% owned Dempsey prospect.

As Peter Strachan from StockAnalysis highlights below, Dempsey could be a company maker worth up to 86 cents per share for SGC.

Given this backdrop and the fact that the company is already generating cash flow from production as indicated below, it is difficult to understand the disconnect between the company’s recent trading range of circa 9 cents and Strachan’s target price of 25 cents.

It is worth noting that this is a risked valuation which only attributes a value of 14.8 cents per share to the Dempsey Field, which under his assessment based on upcoming exploration results could draw a valuation of more than $500 million with $262 million attributable to SGC.

In May, SGC advised that it had begun permitting pipeline connections to facilitate an increase in natural gas production by up to 1.5 million cubic feet of gas per day (mmcfgpd). This additional production would be the result of bringing back online some of the recently acquired shut-in gas wells. At current gas prices of around US$3.50 per mcf the gross cash flow from production from SGC operated wells would be over AUD$4 million per year.

The company has also identified additional workover opportunities and pipeline connections in its portfolio that provide opportunities for further increases in production in the near future. Production facilities also provide access points for future exploration success from Sacgasco’s appraisal and exploration activities.

Interest in farm-out agreements an endorsement of confidence in Dempsey

A key development during the quarter was the signing of an additional farm-out agreement with London Stock Exchange listed Empyrean Energy plc (“EME” or “Empyrean”) for the 1+ TCF natural gas Dempsey Prospect and other Sacramento Basin assets, onshore California.

Commenting on these developments, SGC Managing Director Gary Jeffery said, “A key focus for the Board over recent times has been to de-risk our activities, as evidenced by the strategic farm-out agreements executed during the quarter with both Empyrean and Pancontinental (Bombora)”.

After Farm‐in Working Interests in the Dempsey Gas Project:

Jeffery also highlighted the fact that the company’s ability to execute these agreements has provided the business with the required funding to undertake a number of initiatives as well as completing the drilling of Dempsey in the September quarter, saying. “Sacgasco is now in the enviable position of holding major working interests, and operatorship, over two drill-ready, multi-Tcf natural gas prospects located in one of the largest natural gas markets in North America”.

Importantly, the Empyrean farm-out provided Sacgasco with the necessary funding commitments to drill the Dempsey Prospect immediately. A number of key advancements were made in recent weeks in preparation for the August commencement of a 3200 metre combined appraisal and exploration well, the details of which are illustrated below. 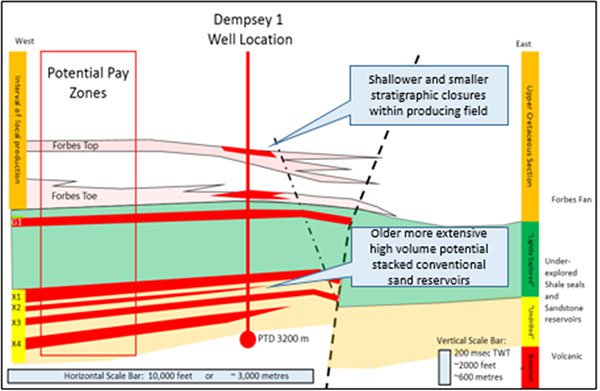 Note: “The estimated quantities of petroleum that may potentially be recovered by the application of a future development project(s) relate to undiscovered accumulations. These estimates have both an associated risk of discovery and a risk of development. Further exploration appraisal and evaluation is required to determine the existence of a significant quantity of potentially movable hydrocarbons.”

The primary targets are interpreted in a series of Cretaceous sandstone reservoirs that exhibit structurally consistent amplitude anomalies similar to those that are observed on seismic elsewhere in the basin where conventional sandstone reservoirs have trapped natural gas in mapped structural closures such as the Tulainyo/James and Alvares wells.

Commenting on the gas pricing environment in California, Jeffery said, “The continuing solid performance of California gas prices (between US$3 and US$3.50 per mcf during the reporting quarter), in one of the lower operating cost environments in the world, in conjunction with improving capital markets for oil and gas investments, underpins a positive outlook for Sacgasco as it embarks on the drilling of the Dempsey well with its potential for significantly increased sales of clean, natural gas in California, a “Top 6 World Economy”.

California consumes enormous quantities of gas, equivalent to around 2.25 times the entire output of Australia’s NW Shelf LNG plants – but produces less than 10% of this consumed gas. The rest is imported from elsewhere in the US and Canada. Hence the premium market for natural gas compared with most of the US.

The following picture of preparations being undertaken for drilling the Dempsey 1-15 show how close the Dempsey well bore is to an existing Sacgasco JV owned meter station connecting to the massive California Natural Gas market. 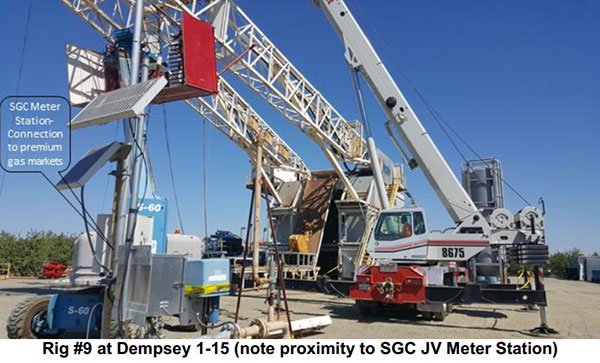 The proximity of the connection to California’s gas pipeline system will facilitate early cashflow from any success at Dempsey. It also means that the commerciality threshold at Dempsey is very low.