Real Energy (ASX: RLE) has ticked an important box on its way to commercialising its Windorah Gas Project with a 15% surge in its share price in the first half hour of trading underlining the significance of this development.

Weston Energy is a gas retailer created by Weston Aluminium Pty Ltd, an established privately owned manufacturing company. The group is cognisant of the importance of having access to a competitively priced gas supply, and the agreement with RLE aims to secure energy supply, a crucial factor in continuing to operate at optimum efficiencies.

The MOU represents a significant step towards signing a binding gas sales agreement (GSA) between the two parties, covering the purchasing by Weston Energy of 3 petajoules (“PJ”) of gas per year for a period of five years.

Management noted that a future binding GSA would be subject to a number of conditions, including the client finalising gas transportation arrangements.

Under the terms of the MOU, Weston Energy will make a prepayment of $6 million, which will give RLE additional financial flexibility to execute future field development activities.

Upgrading resources to reserves could potentially lead to rerating

This agreement also allows RLE to convert its 2C and 3C resources into reserves, an important development in terms of upgrading the valuation attributed to its assets. An independent petroleum engineering group has assessed the 3C gas resources of the project at 672 billion cubic feet of gas.

Indeed, institutional investor Credit Suisse sees the company as representing good value having recently emerged as a substantial shareholder with a stake of circa 5%.

Analysts also have a positive view of the company with Hunter Capital Advisors initiating coverage of the stock in May with a buy recommendation and a valuation of 38 cents per share attributed to its 3C resource, which it expects will increase to circa 52 cents per share as resources are converted to reserves.

While the company’s shares hit a high of 10 cents in the first half hour of trading, the broker’s valuation suggests there could be more upside to come.

With RLE having 100% ownership of three large permits in Queensland, initially focusing on the Toolachee and Patchawarra formations, well known throughout the basin for holding and producing gas, it is well-positioned to take advantage of increasing demand from East Coast users.

As RLE has already completed substantial seismic interpretation in conjunction with existing petroleum well data it has positioned itself to take advantage of this valuable acreage with strong news flow expected over the next 12 months.

Gas sale agreements in the pipeline

This should also be complemented by further developments regarding commercialisation of the Windorah Gas Project with Managing Director, Scott Brown saying today that the company is “looking forward to providing further updates on additional gas sales agreements”.

While Weston Energy is the foundation customer for the Windorah Gas Project, RLE has already forged important relationships in terms of progressing this initiative, including the signing of an MOU with Santos for Windorah’s gas processing.

The supply demand metrics are already compelling, but as the following chart shows, demand for gas from East Coast users is poised to sharply outstrip supply in the near to medium term. 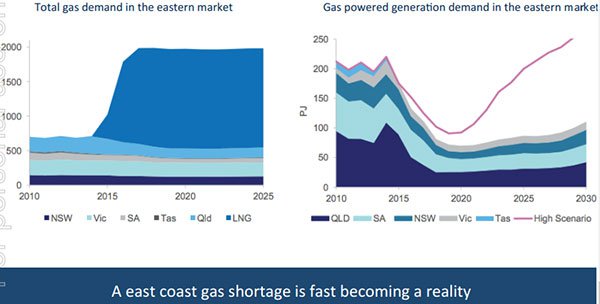