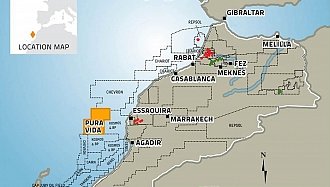 Pura Vida Energy (ASX: PVD) has had its Mazagan permit approved to drill two wells in Morocco under a rig share agreement with Atwood Achiever Deepwater Drillship, which is contracted by Kosmos Energy.

The first well to be drilled will be the Toubkal-1 well, and this will commence in January 2015. The second well is to be drilled in the second half of 2015.

PVD’s Managing Director, Damon Neaves, says: “Securing the rig for the two well drilling campaign is a major milestone which allows us to test key prospects and provides the opportunity for an early assessment of the value of the permit.”

The permit to drill in Mazagan has allowed PVD to begin exploring an area of 10,900km2. Located off the Moroccan coast in the Atlantic, PVD plans to drill to depths of between 1,000-1,500m. Seismatic maps of the area in 2D and 3D have shown there are four separate places where, under the Mazagan permit, PVD has prospects.

PVD has completed a farm out to a subsidiary of Freeport-McMoRan Oil and Gas LLC for its Mazagan permit, placing the company in a good financial position as drilling commences.

PVD entered 2014 in a strong position, with US$28M in the bank, according to its latest half-year report. Since listing on the ASX at the beginning of 2012, PVD has grown substantially.

Along with securing funding for its deepwater drilling in Morocco, the company has also acquired new prospects in Gabon and Madagascar.

In Gabon, PVD has purchased Nkembe Block to produce oilfields. The area is around 1,200km2 with water depths of between 50-500m.

PVD believes there is abundant oil in this area and is currently undergoing a farm-out process to find a partner for the Nkembe Block. It says it is receiving ‘strong interest’ from the oil industry.

The company also holds a 50% stake, with the other half belonging to Sterling Energy, at the Ambilobe Block in Madagascar – an area of 17,650km2.

So far only a little exploration has been carried out in this area and PVD has not begun to drill for oil. However, PVD is currently in phase two of exploration and plans to acquire and process 3D seismic data towards the end of this year.