In a decision that will bring Province Resources Ltd (ASX:PRL) into line with many high profile enterprises, and under the spotlight of investors focused on responsible corporate management, the company has taken the decision to adopt a set of Environmental, Social and Governance (ESG) metrics and disclosures as released by the World Economic Forum (WEF) in Geneva, Switzerland.

Investors have always acknowledged the positive implications of this move with the company shares hitting an all-time high of 16 cents on Monday morning, up nearly 30% on the previous day’s close.

This is the second significant move since the company announced its plans to develop the HyEnergy ZERO CARBON HYDROGENTM Project in the Gascoyne Region of Western Australia.

This morning’s high represents a month-on-month share price gain of more than 500%.

Providing some background on ESG, in 2019 the World Economic Forum’s International Business Council (IBC) flagged the existence of multiple ESG reporting frameworks and the lack of consistency and comparability of metrics as pain points preventing companies from credibly demonstrating to all stakeholders their progress on sustainability and their contributions to the sustainable development goals.

The corporate world has taken up this challenge and what’s more received a tick of approval from the investment community, both at an institutional and retail level.

ESG and impact investing have become key terms for both investors and fund managers, leading a new path to how companies are being researched whilst also influencing fixed income investments.

The same investing ethos has flowed through to the mid-cap and small-caps sectors with the following stocks just a handful of smaller companies that have delivered exponential share price gains of between about 330% and 560% on the back of their commitment to ESG.

Just briefly on the companies featured in the above six-month chart, Vulcan Energy (ASX: VUL - green line) is the best performer (up more than 550%), and the group is well on the path to developing a Zero Carbon Lithium product that has applications in lithium-ion batteries used in the electric vehicle industry.

Like Vulcan, Euro Manganese (ASX: EMN - blue line) is also up by about 550%, and similar to Vulcan the group is based close to the major auto manufacturing hubs in Europe with exposure to the same industry thematic, but its core focus is the production of ultra-high-purity manganese.

EMH’s project is at an advanced stage of development, and the company is racing to become the first local EU battery-grade lithium producer to deliver to an emerging local industry.

The EU is rapidly switching from petrol transport to Electric Vehicles (EVs), as part of the “European Green Deal” which should make Europe carbon neutral by 2050. €750BN has been allocated to generous EV subsidies, alongside penalties for CO2 emissions.

It isn’t surprising then that shares in Province (+400%) even after retracing from 16 cents to 14 cents this morning - black line) have been well supported given its goal is more than just producing and supplying hydrogen as a green source of power, but it aims to take advantage of abundant regional renewable energy resources such as wind and solar energy to generate the power to produce hydrogen that is the secret to putting the zero in its HyEnergy ZERO CARBON HYDROGENTM Project.

Province plans to develop the project in Western Australia's Gascoyne Region which covers a flat-lying arid landscape with low-intensity pastoral land use.

With the Gascoyne's climate and wind patterns, renewable energy is an attractive and viable option.

When you think climatic conditions and landscape in the Gascoyne, it isn’t all that different to the following picture which shows a site where Saudi Arabia is looking to invest hundreds of billions of dollars into developing its own zero emission hydrogen project. 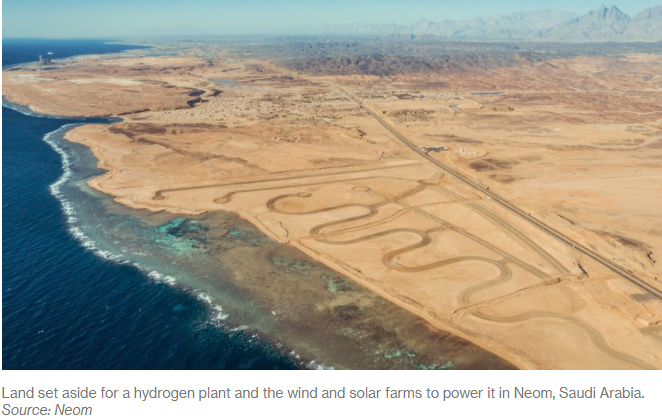 Green hydrogen the next big thing in the renewables sector

Green hydrogen produced from renewable sources has been acknowledged on the global stage as one of the keys to reaching net zero emissions by 2050.

Interestingly, Andrew Forrest who developed the large-scale Fortescue Metals Group (ASX: FMG) iron ore operation in the Pilbara region recently endorsed his support for hydrogen, also underlining how it could be economically produced in large quantities in Australia. Perhaps, not so coincidentally, at the start of March FMG lodged a land application that abuts PRL’s holdings.

Forrest has made no secret of his belief in hydrogen, saying, ‘’Green hydrogen gives Australia an opportunity to slash our emissions — and if we get this right, the impact could be nothing short of nation-building.’’

As indicated in the following address he delivered recently, he is just as passionate about hydrogen as he was when developing his iron ore project, suggesting that he may be ready to make his mark in the industry. Harking back to the broader acceptance of ESG, it is worth noting that in 2020, 33% of the $51.4 trillion in total US assets under professional management used ESG investment criteria, with demand for ESG compliance continuing to rise sharply.

Measurement of ESG metrics offers a tool and roadmap for investors and society to hold companies to account, to make sure that broader issues that impact society are being taken into consideration.

These include climate change, social justice, equality, diversity and environmental protection to name a few.

How a level and transparent platform has been created

In collaboration with Deloitte, EY, KPMG and PwC, the IBC worked to identify a set of universal, material ESG metrics and recommended disclosures that could be reflected in the mainstream annual reports of companies on a consistent basis across industry sectors and countries.

The metrics were designed to be capable of verification and assurance, to enhance transparency and alignment among corporations, investors, and all stakeholders.

The wider objective was to begin reporting collectively on this basis to encourage greater co-operation and alignment among existing standards as well as to accelerate progress towards a systemic solution, such as generally accepted international accounting standards.

The result of this process is 21 core and 34 expanded metrics and disclosures, which the project commends to both IBC members and non-IBC companies for adoption.

These metrics have been adapted by an Australian-based group in Socialsuite to apply directly to ASX companies such as Province Resources.

Socialsuite is a fast-growing global company based in Melbourne, Australia with clients spanning the Asia Pacific, Americas and Europe.

In adopting Socialsuite’s analysis and disclosure methods, Province will use the following dashboard developed by the group to report at regular intervals, providing an easy and transparent way for investors to assess the development of the company’s goals and progress in becoming a “best in class” ESG company. 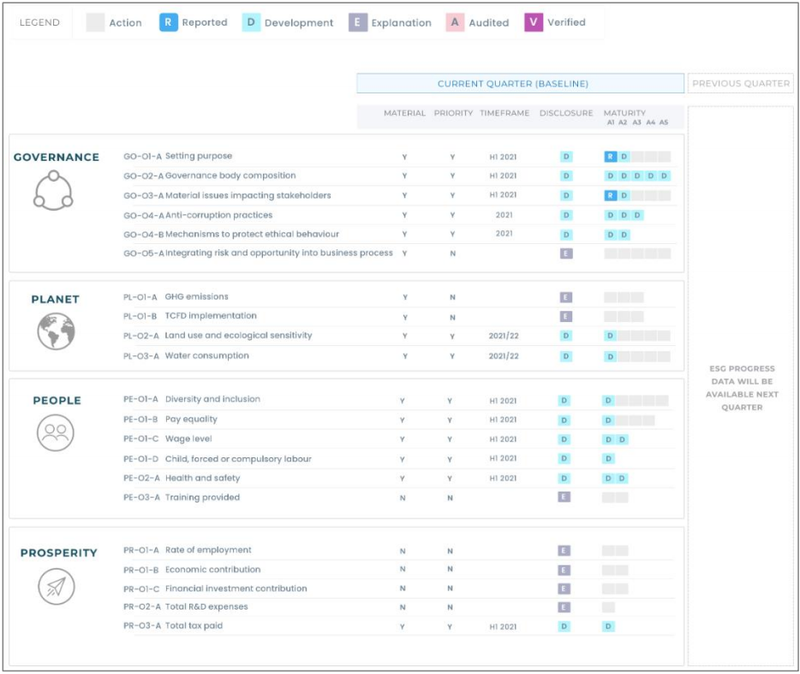