88 Energy Limited (ASX:88E; AIM:88E) has provided a promising update on Project Peregrine, situated on the North Slope of Alaska.

In 2019, seismic reprocessing work was undertaken over 88E’s Project Peregrine as well as on strategically selected regional 2D lines that extended into the Willow oil field to the north of the project area.

It is worth noting that more intensive petrophysical interpretation undertaken following the drilling of the group’s Charlie-1 appraisal well resulted in a substantial upgrade in the well’s net pay estimate, a development that triggered a significant share price increase for the company.

This has held firm in recent weeks despite oil price volatility that has negatively impacted some stocks in the sector.

Consequently, 88E presents as a company that is punching above its weight at its current size, and with the prospect of positive developments related to Project Peregrine, further upside could be imminent.

The prospective upside from this project is particularly enhanced by its location, as it is situated between major oil discoveries at Willow to the north and Umiat the south with the latter being one of Conoco Phillips’ (NYSE:COP) key assets in the region.

The Peregrine Project lies directly to the north of the Umiat oil accumulation that is estimated to have greater than 1.0 billion barrels of oil in place. 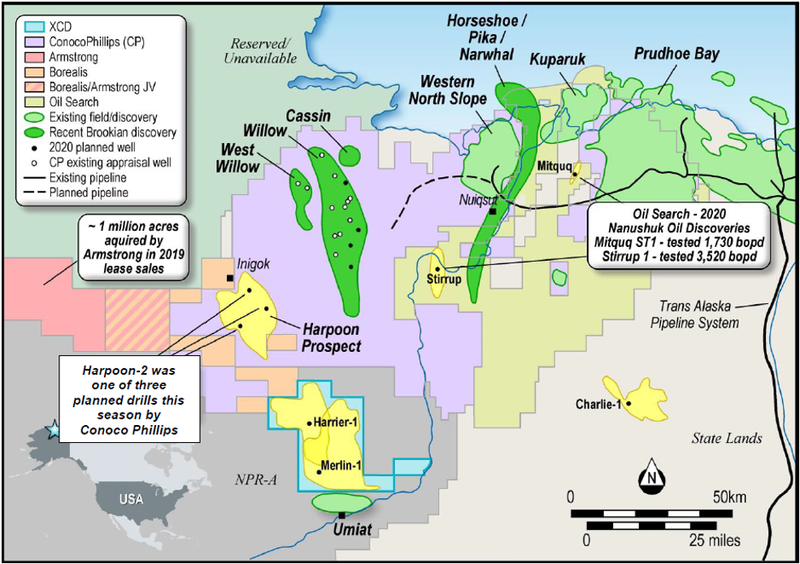 Conoco has confirmed that it encountered hydrocarbons at its Harpoon prospect, which is interpreted to be directly on trend and analogous to the Harrier prospect at Peregrine.

The Willow oil discovery (750 million barrels) is considered a direct analogy to the Merlin prospect.

In its announcement released today, management said that seismic reprocessing work undertaken by 88E confirmed that the same shelf margins and geology extended from Willow south into the group’s acreage and analogous seismic signatures were evident at the discovered field and 88E’s prospects.

This was the basis for the mapping of the prospects and the independent resource estimate released in January 2020, which were subsequently updated in May 2020.

Following the reprocessing, amplitude vs offset studies (AVO) were also conducted and 88E has finalised its review of these products, with very encouraging results. 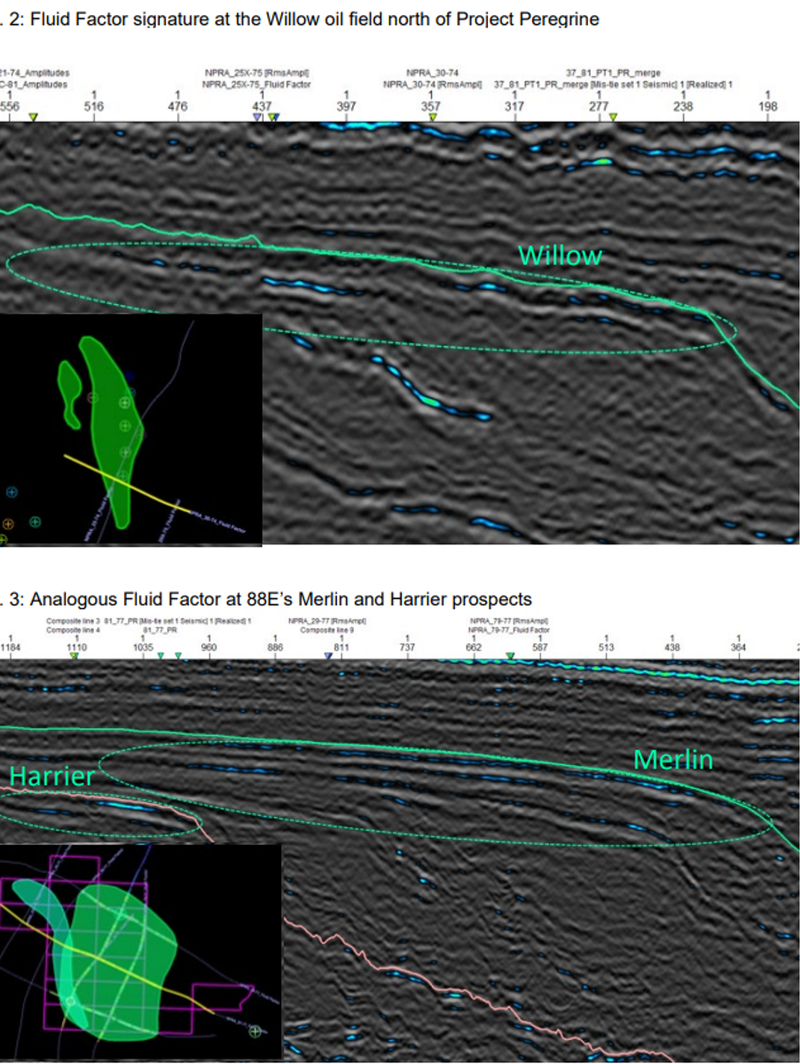 Adding further flavour to the story is the fact that the Harpoon prospect is just 15 kilometres north-west of project Peregrine’s lease position.

88E has identified two primary prospects, Merlin and Harrier that total over 1 billion barrels, targets that should be the subject of drilling in early 2021.

Harrier has recently been de-risked by evidence of hydrocarbons at Conoco’s Harpoon-2 well.

88E will be undertaking low-cost options for well drilling, estimating that two wells are expected to cost US$15 million.

Harking back to today’s news, management said that the dataroom for the Project Peregrine farm-out has now been open for several weeks, with multiple parties at various stages of technical due diligence, several of whom are now progressing to commercial discussions.

Permitting and planning work related to drilling of up to two wells at Project Peregrine commencing in the March quarter of 2021 remains on schedule.

Commenting on the significance of these latest developments, managing director Dave Wall said, "The recent AVO work is highly encouraging and provides additional confidence in both the Merlin and Harrier prospects.

‘’Additionally, both planning and farm-out activity is progressing well towards the planned March quarter 2021 spud date, now less than 6 months’ away.”

Consequently, there are multiple potential share price catalysts on the horizon in the way of commercial transactions and drilling results, with success from adjacent players not to be discounted in terms of providing share price momentum.