Queensland focused oil and gas company, Real Energy Corporation Limited (ASX:RLE) advised on Thursday that an independent review of the data for Project Venus (ATP2051 - previously PLR2019-1-11) has determined that the best estimate for the potentially recoverable prospective gas resources is 694 petajoules.

As a means of explanation, there are strict parameters that apply to determining a prospective gas resource.

The volumes were obtained by calculating the potentially recoverable portion of the gas-in-place using the overall prospect area of 154 square kilometres, the mapped net coal thickness, raw gas content and coal density, as well as a range of estimates of the gas recovery factor of the coals.

However, setting aside the fine print, this is a promising development for the 50-50 joint venture owners, Real Energy and Strata-X Energy (ASX:SXA), a company that is actively engaged in oil and gas exploration and development.

In October the joint venture partners were appointed preferred bidders for the Queensland Government’s coal seam gas (CSG) acreage in the highly prospective Walloon Fairway near Miles in Queensland.

Project Venus is situated in the Surat Basin, a prolific gas producing region where more than 4000 wells have been drilled, and the following map not only shows the location of Venus, but highlights the other major players that are active in that area (see Legend). 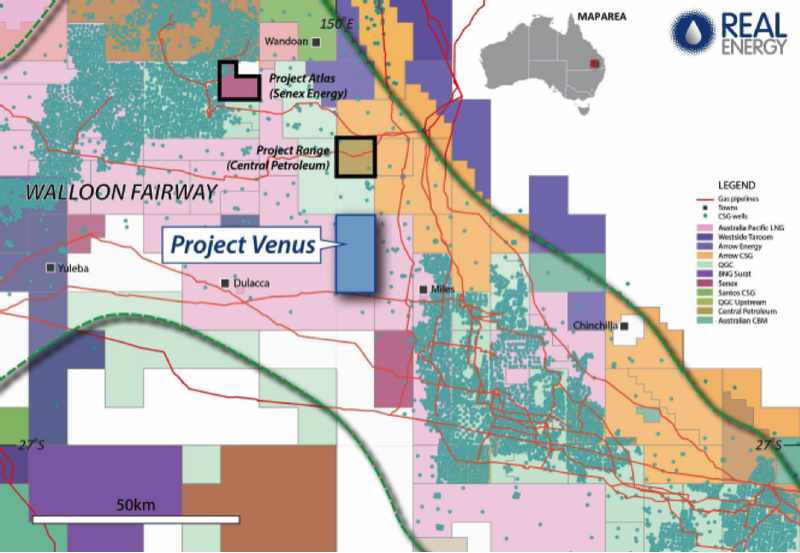 Given the location of the Venus Project immediately adjacent to gas infrastructure, the JV is aiming to expedite the progressive conversion of gas resources to gas reserves with the goal to fast track development of the project thereby offering the potential for early cash flows.

Real Energy, as operator, has submitted and completed all the matters required to allow ATP2051 to be granted.

Management expects the permit to be granted shortly by the Queensland Government and is preparing to start field work in early 2020.

Read: Cash in on the east coast gas crisis