With the oil price continuing to hit multi-year highs and the S&P/ASX 200 Energy Index (ASX:XEJ) hovering in the vicinity of 8200 points, up nearly 70% from its COVID crash low of about 5000 points last March, it may be time to look at some of the smaller players in the energy sector that have been overlooked despite surges in the majors such as Woodside Petroleum (ASX:WPL), Santos (ASX:STO) and Oil Search (ASX:OSH).

On this note, 88 Energy (ASX:88E; AIM:88E; OTC:EEENF) may be worth considering, particularly following recent developments that have seen a new managing director take the helm, a cash injection of US$18.7 million that has extinguished its debt and today’s release of results from the group’s Merlin-1 testing program.

Investors appear to have latched onto these developments this week with the company’s shares increasing 25%.

Along with some other highly prospective assets, Merlin-1 is on the North Slope of Alaska.

The Merlin-1 well was spudded in March 2021 and targeted 645 million barrels of gross mean prospective resource.

Drilling is now complete, and interpretation of results is underway.

A second well, Harrier-1, is planned to be drilled in 2022 and is targeting a gross mean prospective resource of 417 million barrels.

88 Energy has recently received initial results from 5 of the 18 specifically selected trims from the side wall cores, with 2 of the 5 confirming the presence of hydrocarbons.

Importantly, these depths were among the prospective zones that were not able to be tested with the RDT downhole fluid extraction tool.

These zones also correspond with depths where good oil shows were noted during drilling - in geological terms, this included petroliferous odour, fluorescence and cut.

Small trims were cut from the side of several of the 48 side wall cores to undergo special analysis, and the remaining material is reserved for routine core analysis.

The following gas chromatography charts show a spread of carbon compounds with lighter molecules on the left and heavier components on the right.

As illustrated above, oil signatures may be inferred by the presence of heavier carbon compounds seen in two of the five samples run to date.

Importantly these signatures show no evidence of biodegradation, and the highly encouraging test results to date serve to refine the company’s understanding of both the quantity and the mobility of hydrocarbons in place as well as the commercial potential of the greater Project Peregrine acreage, which will be further appraised in coming seasons.

Project Peregrine is located in the NPR-A region of the North Slope of Alaska and encompasses approximately 195,000 contiguous acres.

As shown below, it is situated on-trend to recent discoveries in a newly successful play type in topset sands in the Nanushuk formation. 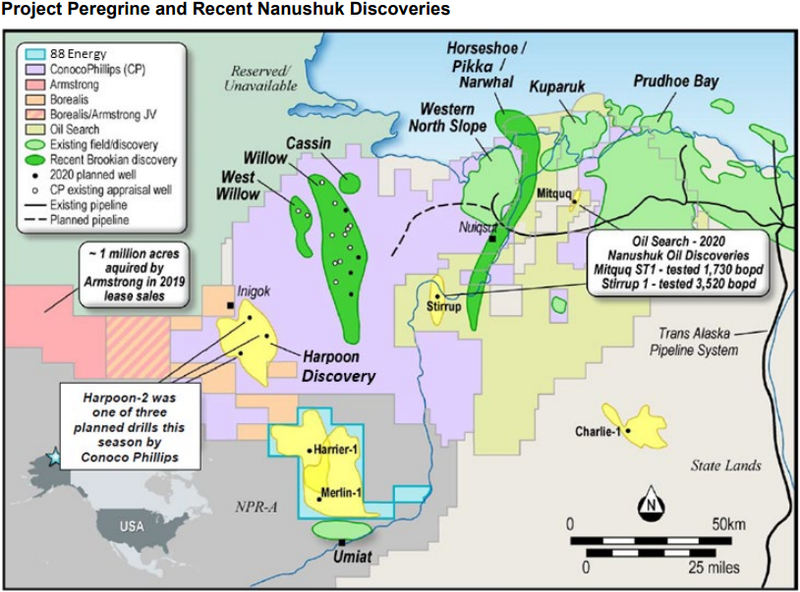 Management flagged the pending release of further results from the remaining 13 trims over the coming weeks, and in discussing these recent developments said, “The company is highly encouraged by the preliminary results received to date from the Merlin-1 testing program, with analysis and interpretation of results ongoing.

"Once complete, these will be consolidated and integrated into the Project Peregrine database, which will form the basis of future farm-out and exploration on the acreage.’’

Phase two of the geochemical analysis program on the side-wall core trims will commence after completion of the analysis of the remaining 13 trims, which will include a range of analytical processes.

The following graphic highlights the comprehensive nature of analysis completed to date (blue) and work that is still to be completed (grey). 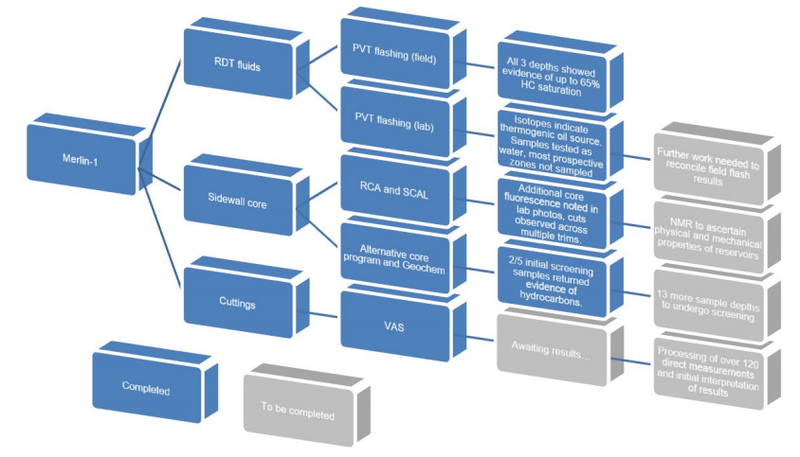