In a highly promising development, a ‘giant-scale’ prospective oil resource potential has now been quantified by Independent Experts.

In industry terms, a ‘giant’ field has at least 500 million barrels of oil equivalent recoverable potential.

This news underlines Pancontinental’s advantageous position in Namibia where it has material interests in two large blocks, PEL 87 and PEL 37, with the latter currently being drilled to a total depth of 3830 metres.

As this news unfolded, management paid tribute to the pioneering and ongoing work of director, Barry Rushworth and long-time director Mr Ernie Myers.

Under their stewardship over the last decade, it could be argued that Pancontinental was in the top echelon of smaller industry players in identifying new prospects in relatively underexplored regions.

On this note, Pancontinental founded the PEL 37 joint venture which is in the process of drilling the highly anticipated Cormorant-1 well.

The enormous oil potential of PEL 87 is now being documented, indicating that there are dual share price catalysts at play as results from drilling at PEL 37 emerge.

Of course PCL remains a speculative stock and investors should seek professional financial advice if considering this stock for their portfolio.[J1]

Good quality 2D seismic data totalling over 2,800 line kilometres, regional well information including the Moosehead -1 well (drilled on an invalid play in the block in 2013), sequence stratigraphic mapping and other techniques have been used to map the potential of PEL 87.

Importantly, much of the broader region is either unexplored, or has not been assessed using modern technology is now available to the likes of Pancontinental.

The largest of the prospective plays identified so far is a Cretaceous (Late Aptian) turbidite fan system covering 2400 square kilometres.

This “Saturn Superfan” highlighted in the seismic section below corresponds to the Ponded Turbidite Fairway reported in June 2018.

Water depths across the feature vary from approximately 800 metres to 1900 metres east to west.

The Saturn Superfan is located almost entirely within PEL 87 and has a different age and depositional history to the fan bodies in Pancontinental’s PEL 37 block in the Walvis Basin to the north.

There, by contrast, the Cormorant-1 well is currently testing one of several large submarine fan bodies with sediment sourced from the east and deposited directly in front of the depositional slope.

There are a range of large leads within the Superfan, with differing trap characteristics.

The key Moosehead-1 well, however, provides accurate seismic ties that prove a thick shale Top Seal over the Superfan, as well as the underlying shales that form a Bottom Seal and a thick Mature Oil Source.

High quality, marginally oil-mature source rocks were penetrated by Moosehead-1 in 2013. These same oil-prone source rocks are interpreted to be fully oil mature beneath the Superfan, due to greater burial depth, as well as over a very large area adjacent to the Superfan.

The Superfan has been examined by Brian Diamond, an independent expert in calculating Prospective Hydrocarbon Resources.

Diamond is a geoscientist with more than 20 years’ experience, practising in Petroleum Geology and Resource estimation.

His analysis of the data is extremely useful, particularly given the geological features of these leads are sometimes complex.

The potential recoverable oil resources, classified as Prospective Resources, have been estimated probabilistically on an unrisked, best estimate basis as indicated below. 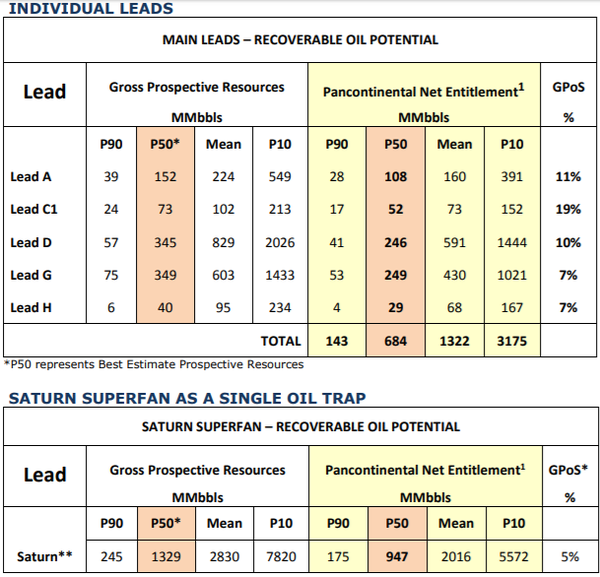 Cautionary Statement - The estimated quantities of petroleum that may potentially be recovered by the application of a future development project(s) relate to undiscovered accumulations. These estimates have both an associated risk of discovery and a risk of development. Further exploration appraisal and evaluation is required to determine the existence of a significant quantity of potentially moveable hydrocarbons.

Preliminary estimates of the exploration risk are expected to substantially improve after future work designed to mature the best leads to prospect status.

Reflecting the relatively early stage of the project, the estimated chances of discovery range from 5% to 19%.

The main technical elements of risk relate to reservoir presence due to the lack of a well penetration and, for the purely stratigraphic traps, the sealing elements.

Pancontinental considers that if oil is discovered within the resource ranges estimated, then assuming that industry development costs and oil pricing are similar to those currently prevailing, it is probable that a commercial development would take place.

Pancontinental is continuing to map other potential oil-bearing features, both on trend, and in other parts of the 10,947 square kilometre PEL 87 area.

Management intends, as it has so successfully done in the past, to seek a major joint venture partner to fund an accelerated forward program, including 3D seismic over the Saturn Superfan.

The recent published details of accelerated investment activity by major oil companies into Namibia provide Pancontinental with a significant degree of confidence in its forward strategy.

Demonstrating activity in the area, oil major ExxonMobil recently farmed-in to a second block (PEL 44) on trend to Pancontinental’s PEL 37.

This followed its farm-in to the block immediately adjacent to PEL 37 in April.

In summary, Pancontinental is in the right place at the right time and is in good company.

Consequently, it should be spoilt for choice in finding a joint venture partner at PEL 87, particularly given the data that has just come to hand.

Such a development could provide share price momentum as it would be just as much a show of confidence as a potential means of financing further exploration with the prospect of moving to development.